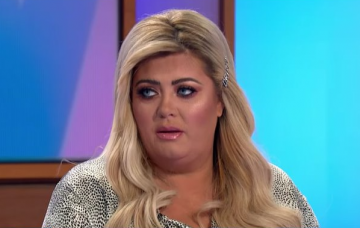 Star has said she fears for her life

Gemma Collins has been advised by police to leave her home indefinitely, according to reports.

The Only Way is Essex star spoke to police on Friday (01.03.19) to discuss her concerns about an alleged stalker, who she revealed on Instagram had abused her in the street and spotted walking outside her Essex home.

Pictures obtained by The Sun on Sunday newspaper showed Gemma being escorted from her abode by two police officers and a security team and insiders revealed she is “incredibly shaken” by the man.

A source said: “Poor Gemma is traumatised by this entire episode.

“She is really upset and anxious, and has been scared to even leave her house.

“Gemma is always incredibly friendly and open to all her fans so to have someone abuse her in this way, and threaten her so horrifically, has left her incredibly shaken.

“Police are taking this matter very seriously, and given her some practical advice in how to handle herself going forwards. It is an ongoing investigation.”

The Dancing on Ice contestant – who recently split from boyfriend James ‘Arg’ Argent – had told her Instagram followers she was “scared for [her] life” after spotting the man outside her home.

She wrote on Instagram alongside a video of the unnamed man: “Do you all remember that shocking video of two boys horrifically ABUSING ME well I am now petrified for my LIFE he has now found my home I AM SCARED FOR MY LIFE

“I am so grateful for how amazing the police have been I am actually scared for my life ….. has been here since SATURDAY why would you abuse someone then find out where they live and make them petrified I can’t leave my home through FEAR ….. I don’t feel safe and I feel very THREATENED and UNSAFE (sic)”

Read more: Dancing on Ice bosses worried Gemma will be a no-show at the final

The videos showed the man sitting in a car and then walking around her building, with police then shown speaking to him, but the 38-year-old star claimed he told them he was a paparazzi photographer.

Are you concerned for Gemma? Leave us a comment on our Facebook page @EntertainmentDailyFix and let us know what you think!