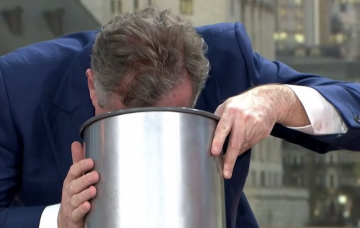 Some thought his antics were over the top

After he sparked fierce debate about Greggs’ vegan sausage rolls last week, Piers Morgan has gone one step further by trying one and throwing it up live on Good Morning Britain!

“I mean they just stink, for one…” Piers complained as he was presented with a plate of the vegan treats, before biting into one.

After grimacing and grumbling like a child that won’t eat their vegetables, he proceeded to grab a bin from under his desk and spit out his mouthful.

The presenter’s first show after the Christmas break was made pretty memorable by the gross mishap. But his reaction certainly irked viewers.

While some thought his dramatic display was over the top, others slammed him for dragging out the argument from last week.

“Honestly like a pantomime?? This man does anything for a reaction,” tweeted one viewer, while another added: “This is getting boring now 🙄.”

A third commented on his sick bucket stint: “Tad over the top I think.”

Honestly like a pantomime?? This man does anything for a reaction

This is getting boring now 🙄

Tad over the top I think

Nobody was waiting for a vegan bloody sausage, you PC-ravaged clowns. https://t.co/QEiqG9qx2G

He was then met with criticism from vegans everywhere and even some of his showbiz pals, including Amanda Holden, put him in his place!

But we doubt the broadcaster will be issuing any kind of apology to vegans after today’s antics.

Piers already stated in his ‘New Year’s resolution’ tweet that he is unapologetic for his outspoken ways.

He declared: “My New Year’s Resolution for 2019 is to be just as annoying, argumentative & insufferably right about everything as I’ve been in 2018. Zero apologies in advance to all whiny PC-crazed snowflake imbeciles who will be horrifically offended by absolutely everything I say or write..”

What do you think of Piers’ reaction on GMB today? Leave us a comment on our Facebook page @EntertainmentDailyFix and let us know!