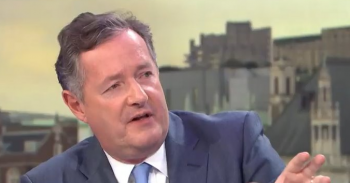 He was caught up in a heated debate

Piers and co-host Susanna Reid interviewed Ari, who identifies as non-binary, and he became embroiled in a heated discussion about Ari raising a child as a ‘theyby’.

Floridian Ari has toddler Sparrow and explained that the child will learn their gender as they grow up.

Ari also has eight-year-old Hazel, who is being raised in the same way.

Ari said during the video link interview: “All children at this age are developmentally unable to understand gender yet. It’s not that the child is non-binary. The child doesn’t have any gender yet. Obviously they have anatomy.”

But straight-talking Piers soon waded in with his view on the situation.

The dad-of-four said that, while he has no issue with Ari’s way of living life, he has a problem with it being imposed on the young children.

He cut in: “Ari, I’m sorry to be the stick in the mud here. A two-year-old kid hasn’t got a scooby doo about this stuff. The idea that you as a parent would even countenance the idea that a two-year-old child has any ability to form any is utterly ridiculous and actually damaging to that child.”

As they continued to disagree, the 53-year-old broadcaster added: “A parents’ job is to also take responsible decision on behalf of their kids. To grow and nurture them.

“It seems you’re taking all responsibility from you as a parent and putting it on the heads of these tiny kids. It’s all down to them making these enormous life-changing decisions. I say that is an abdication of your parental responsiblities.”

He ranted that he doesn’t agree with allowing a child to choose their name on a “whim” because they would come up with “nonsense”.

Ari responded with: “What you’re expressing is a bit of childism, which is assuming that someone has to be a legal adult to have the capacity to know themselves.”

A rather shocked-looking Piers then admitted he was “speechless” after Ari accused him of “childism”.

He later tweeted that it had been an “exasperating” morning.