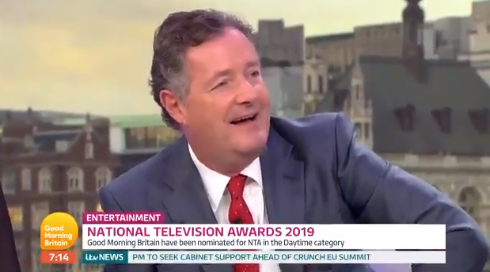 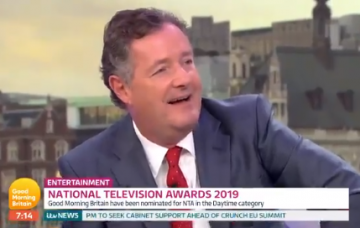 Piers Morgan has taken a swipe at Ant McPartlin as it was revealed he’s been nominated for Best Presenter at the National Television Awards alongside Dec Donnelly.

Piers, who is also nominated for the award, said he’s certain the duo will win the prestigious gong even though Ant “hasn’t done a shred of work for the whole year”.

On Tuesday’s Good Morning Britain, Piers read out the longlist of the 43 presenters who made the cut and was delighted to discover his co-star Susanna Reid had not.

As showbiz correspondent Richard Arnold revealed Susanna wasn’t on the list, Piers declared: “Get in there!”

Looking through the list, Piers continued: “I’m there. Ben Shephard made it. The blokes have got the nod. No Susanna Reid. That’s made my year!” as he laughed.

That awkward moment when one presenter makes the #NTAs nomination list, but the other presenter doesn’t! @piersmorgan | @susannareid100 | @RichardAArnold | @benshephard pic.twitter.com/mjhiXBaAf2

Susanna replied: “Can I just point out there are 12 women on this list of 43 presenters. There are 31 men.”

Piers then joked: “Susanna Reid in ‘NTAs is sexist because I’m not on the list’ shocker.”

After Piers shared that This Morning’s Holly Willoughby, Graham Norton and Gary Lineker had all made the list, Susanna said: “To be honest, there’s no point in being on that list as they will win,” as she pointed at the list.

Piers agreed: “Ant and Dec will win despite Ant not doing a shred of work for the year. He’ll win it.”

That statement isn’t quite right though, as Ant did present most of the last series of Saturday Night Takeaway and the pre-recorded auditions on Britain’s Got Talent.

The beloved Geordie duo have been nominated for their work on Saturday Night Takeaway, Britain’s Got Talent and I’m A Celebrity… Get Me Out Of Here!.

Last year, Ant entered rehab to tackle drink issues and painkiller addiction but returned to TV to present I’m A Celeb alongside Dec in November 2017.

He was also by Dec’s side on the new series of Saturday Night Takeaway, which began in March this year.

But Dec had to present the final two episodes of the show himself, after Ant was involved in a drink-drive crash in London.

Read more: Ant McPartlin and Lisa Armstrong due to be divorced at London court

Dec, 42, also hosted the Britain’s Got Talent live shows on his own and Ant revealed that he’s taking the rest of the year off to focus on his well-being.

Dec will be co-hosting I’m A Celeb this year with This Morning presenter Holly Willoughby.

Meanwhile, Piers’ show Life Stories is up for the Bruce Forsyth Entertainment Award while Good Morning Britain has been nominated for the Best Daytime Show award.

Voting is now open for next year’s ceremony, which will take place at London’s O2 in January. Dermot will be hosting the awards.

Who do you think should win the Best TV Presenter award? Leave us a comment on our Facebook page @EntertainmentDailyFix and let us know what you think!