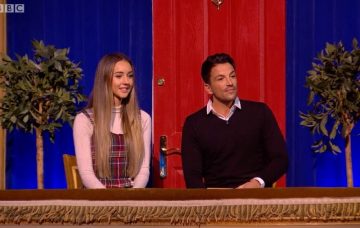 The joke is on them

Peter Andre has hit back at trolls after they claimed he looked old enough to be his wife Emily’s dad when they appeared on Michael McIntyre’s Big Show.

Peter, 45, and Emily, 29, were surprised in bed as part of the Midnight Gameshow, but viewers took to Twitter to mock the couple’s age gap.

One wrote: “I thought Peter Andre was with his daughter not his wife!! She looks about 14 years old!”

While another wrote: “How old is Peter Andre’s wife? She looks about 14!”

Is it me or is Peter Andre wife looks 12 yrs old.

Fuming the reality star took to his column in New! magazine to hit back. He wrote: “I saw some people commented saying she looks 12 years old.

“The joke’s on them, though, because while they might think they’re being cruel, they’re actually paying her a huge compliment.”

He added: “My wife is 30 this year, so how great is it that people think she looks so youthful. When she’s 50 she’s going to look like she’s in her twenties – good on her.”

The mum-of-two has also previously had to defend the age difference in their relationship.

She told OK magazine: “Pete and I always joke that I act a few years older and he acts a few years younger so we meet in the middle.”

The doctor, who was in on the prank by Michael McIntyre that saw a film crew entering their bedroom in the middle of the night, was concerned her husband may not react so well to the surprise.

She said: “It was a total surprise to him. I was actually worried he might attack Michael as he’s quite protective.

“He’s into his kung fu so I thought he might spring into action when he was woken up by a load of people.”

How would you react if Michael McIntyre turned up in your bedroom in the dead of night? Leave us a comment on our Facebook page @EntertainmentDailyFix and let us know what you think!