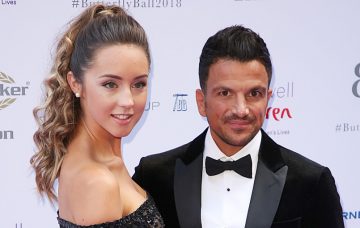 If you don't have anything nice to say...

Peter Andre has been cruelly trolled over the the age gap between himself and wife Emily, who is 16 years younger.

The Mysterious Girl singer, 45, uploaded a cute snap of a pouting Emily on Instagram with the caption: “Mwah:) Thought this was a cute pic of her. She has no idea of course.”

But others were more cutting, with some even saying that Emily looks young enough to be Peter’s daughter.

The trolls sparked a furious debate in the picture’s comments. One said she “looks like a teenager” and someone else asked: “Is she sat on the naughty step??”

Another wrote scathingly: “Nice but she looks so like to be your daughter rather than a lover-bit weird seeing the obvious age gap….”

But Peter’s fans turned out in droves to defend him.

One replied: “Who cares about the age gap! You two are so lovely together and have lovely children x. Enjoy and forget about the haters! X. You both look brilliant.”

Another asked: “Who cares, they are happy and love each other!”

Pete met Emily in 2010, shortly after her doctor dad treated him for kidney stones.

A year after his high-profile split from ex Katie Price, Peter asked Emily’s dad for his permission to date her.

The pair got together but kept their romance hushed up until 2012, when she featured on his reality show.

Emily fell pregnant with their son, Theo, following year, and just days before the birth Pete stepped up and asked Emily to marry him.

Their daughter, Amelia, was born in 2014, and the couple finally tied the knot on July 11, 2015 in a ceremony at Mamhead House – a posh 164-acre country estate on the Devon coast.

Comments about the age gap have hit NHS doctor Emily hard in the past – so much so that she doesn’t have any profiles on social media.

In a conversation with OK! Magazine in 2017, she said she understands that people being nasty is the downside of fame.

She told the mag: “In the past I’ve read people criticising me and Pete, whether it’s the age difference or our appearance, and I find it hard when people say I’m too young to be with him – my skin is not thick enough and I find it very upsetting.

“He’s in his forties and he looks great. He still comes home to me and gives me cuddles.”

Last month, Peter revealed in a gushing interview with The Sunday Times just how much he loves Emily, whom he called a “a proper, beautiful, educated lady”.

What do you think of the 16-year age gap between Pete and Emily? Leave us a comment on our Facebook page @EntertainmentDailyFix and let us know what you think!