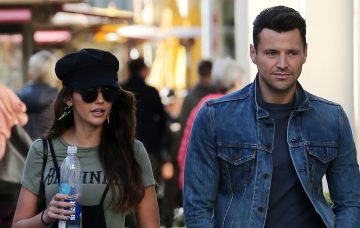 They have been enjoying a rare break away

Michelle Keegan is a girl after our own heart, as she’s shared a very honest insight into what she’s been getting up to on her skiing holiday with hubby Mark Wright.

Mich joked that she’s no skiing pro and had a rest just an hour in to being on the piste!

The former Coronation Street star posted a snap of her basking in the sun in a deckchair to Instagram – and the only mountain she was tackling was the one made of whipped cream on top of the humungous hot chocolate she was enjoying!

She sarcastically captioned her pic: “An hour in of being absolute pros…”

The 31-year-old was taking a snowy break away with Mark and some pals and she seemed to be loving it so far.

Clearly this was something to do with the indulgent “pit stop” they had made as she joked that “heaven touched” her lips.

Michelle seemed happier to sunbathe and watch fellow skiers as she shared a video of her picturesque surroundings.

Mark, 32, also seemed to be enjoying their time away. He shared a photo of them on the slopes making the “best memories”.

And former TOWIE star Mark later proved that his wife is in fact a pretty good skier!

His Instagram Story showed them skiing down a track and Mich looked comfortable as she coasted along.

The actress has got into the habit of proving how down to earth she is recently.

Her ski slope-dodging confession comes after she ran errands in her slippers last week – made known to all by Mark, who found it hilarious and teased her for it!

Read more: Gemma Oaten once told she had only 24 hours to live during anorexia battle

Michelle has been enjoying more time with Mark since wrapping the third series of her BBC One drama, Our Girl.

After spending months abroad for work, she has been catching up with friends and family before filming for the fourth series kicks off later this year.