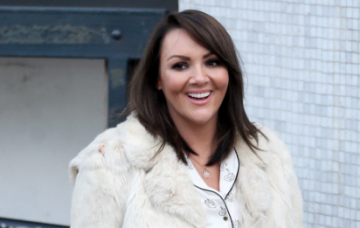 Singing is her "first love"

To many, Martine McCutcheon remains most famous for playing Tiffany in EastEnders, and she’s now admitted her time as a soap star has made it harder for her to be taken seriously as a musician.

The 41-year-old, who was in EastEnders for three years before being dramatically killed off in 1998, has told her Instagram followers music has always been her first love.

The Love Actually star admitted she’s taken acting roles because she “had to go where the work was” but what she loves the most is singing.

As she shared a picture on her Instagram account revealing the dates of her upcoming UK tour, she wrote that she’s delighted to be returning to her passion.

She said: “#Didyouknow that: People sometimes forget that music was my first love. I was signed to @polydorrecords At 14…

“After 3 years of success in the dance charts but never crossing over to the mainstream, I realised I had to go where the work was and found myself acting on screen and on stage but I ALWAYS came back to music.

“After making a name for myself in Eastenders I knew it wouldn’t be the easiest route to have long term success as a recording artist.

Martine, who had a number of hits after she left EastEnders including making it to number one in the charts with Perfect Moment in 1999, added: “I was told every hit may be my last… but I worked hard and was lucky to have had great success for many years.”

She went on to land a part in the West End in My Fair Lady but ill-health meant she had to pull out of many performances.

She later revealed she’d been suffering with chronic fatigue syndrome ME.

Her post continued: “After taking time out for nearly a decade I finally released my new album Lost And Found last year.

“Thanks to the success and wonderful reviews of such a personal album (from the bottom of my heart I thank all of you that supported it) my live concerts were a great triumph and I am now getting my new 20 date tour ready!!

“I’m pinching myself I really am… They say true wealth is waking up everyday and doing what you love so I feel so grateful and blessed and I’ve never taken it for granted.”

She then thanked her 181k followers for their support, writing: “The one constant in my life and my career has been YOU – my loyal supporters and Fans…. Your support undoubtedly kept me going through the trickier times so THANK YOU. “

Tickets for Martine’s tour are on sale now.

She said attendees can expect “some amazing songs” while she will also be “telling some stories about my life and career and I will also be answering some of your questions on the evening too.”

Good to have you back, Martine!

Will you go and see Martine on tour? Leave us a comment on our Facebook page @EntertainmentDailyFix and let us know what you think!