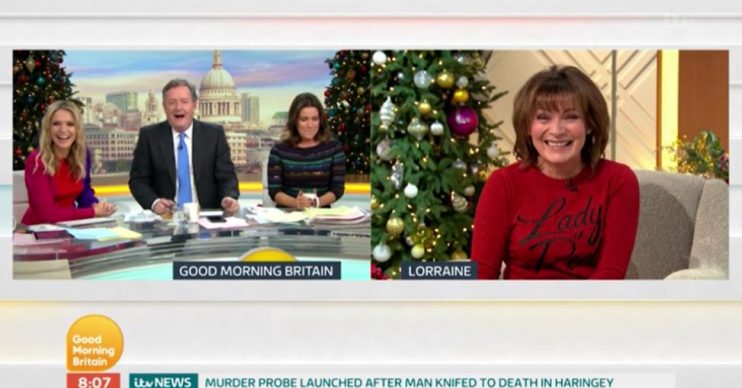 She said he used to be a bit "chubby"

Presenter Piers Morgan was stunned when Lorraine Kelly told him he used to be ‘fat’ in a brutal back-handed compliment on Good Morning Britain.

On today’s (10.12.19) episode, hosts Piers, Susanna Reid and Charlotte Hawkins were telling viewers what they could expect from Lorraine, which is on ITV right after at 8.30am.

Speaking via video link, the Scottish TV host said: “You’ve been very naughty today… you’re not as fat as you used to be, though!”

Lorraine kept a completely straight face as the words left her mouth, although over in the GMB studio, Susanna and Charlotte both put their hands over their mouths and fell about laughing.

“Remember?” Lorraine added. “You were quite chubby but you’re not chubby now.”

But Susanna cut in: “Hang on, your best friends tell you that you’re carrying too much timber. We know you and Lorraine are very close.”

Lorraine, meanwhile, sat laughing her head off as Piers said: “I would never have categorised myself as obese.”

“No, but you were chubby,” she insisted.

Well rounded and well nourished is the phrase I’d use.

“I… I’m getting Lorrained here, aren’t I?” Piers replied.

He added, in reference to his ITV colleague’s recent savaging of Boris Johnson’s ‘friend’ Jennifer Arcuri, and the resurgence of her feud with MP and former presenter Esther McVey earlier this year: “I now know how Esther McVey and Jennifer Arcuri felt. The turrets have turned!”

“Well rounded and well nourished is the phrase I’d use,” Piers corrected her.

It follows photos that Piers shared on Instagram earlier this year to show off the results of his workouts.

During a holiday in California, the dad of four posted a snap of himself and son Stanley enjoying a bike ride around LA’s Santa Monica beach, and other of his posh Peloton exercise bike.

In another photo, Piers impressed his followers as he posed with his arms folded to show off his toned biceps outside the famous Venice Beach weights pen.