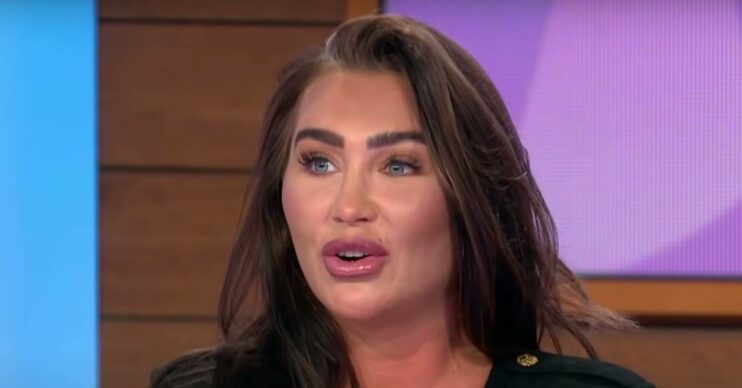 She is trying to come to terms with her loss

Devastated Lauren Goodger has spoken of the heartbreaking loss of her baby daughter Lorena, and how she’ll say her ‘final goodbye’.

The reality TV star and her partner Charles Drury lost their newborn on July 8.

Baby Lorena was born with the umbilical chord around her neck.

Parents Lauren and Charles decided to have a post-mortem carried out to understand exactly what happened.

Lauren, 35, spoke out in an interview with New! magazine earlier this week.

I’d do anything to rewind it.

She said: “I need more of an understanding of why this happened. I don’t blame anyone, I can’t. It is what it is, and obviously, it’s awful. I’d do anything to rewind it. I guess I can blame myself, but then again I think it’s happened and I can’t change it.”

Lauren said she took a “clipping of her beautiful hair and I’ve had her hands and feet cast”.

Additionally former TOWIE star Lauren has a candle burning constantly in memory of the tot.

Lauren said: “My friends bought me the gold locket with pictures of Lorena inside and I’m getting a bangle made of her name.”

Despite not being a ‘tattoo person’ Lauren also plans to have her second daughter’s name inked on her body.

When it comes to their final goodbye, Lauren has something special planned.

She said she will give Lorena a teddy bear that she’s kept with her following her daughter’s death.

“Lorena has a teddy with her now and I’ve got a matching one, which I keep with me. When I say my final goodbye to her, I’m going to swap them over. I’m going to have the one she’s had, and she will have the one I’ve had,” she said.

How is Lauren coping now?

Charles, a labourer, and Lauren went public with their romance in October 2020.

Just three months later they revealed they were expecting baby Larose, now one.

Devastated Lauren and Charles spent 24 hours holding their daughter in the hospital.

Lauren announced their tragic news of her death on her Instagram account with a picture of her holding the baby’s tiny hand.

She wrote: “She was the most beautiful healthy baby I’ve ever seen, just like her sister.”

“…I just need this time with my baby girl Larose, she is my rock that is getting me through this or I wouldn’t survive.”

Lauren admits it is difficult to put on a brave face for her young daughter.

Grief is hardest to deal with and hits hardest in the evening, Lauren says.