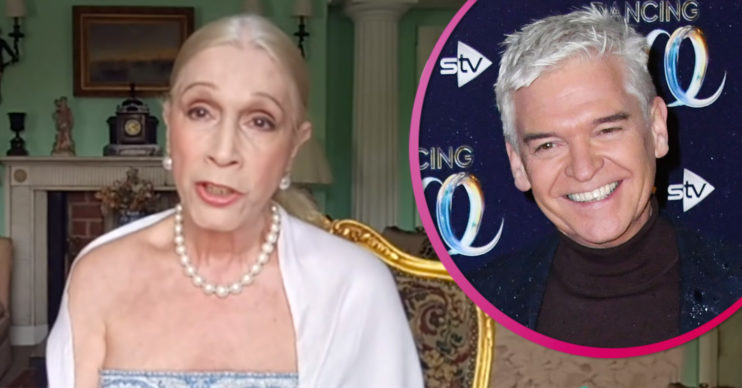 The pair clashed on This Morning last month

Lady C has launched another attack on Phillip Schofield weeks after their This Morning clash.

Last month, the I’m A Celebrity star branded Phil “ignorant” during a discussion about her new biography about Meghan Markle and Prince Harry.

On the programme, Phil accused her of being a “gossip”.

Now, the author has made another dig at the daytime TV presenter and branded him a “creep”.

Speaking to the Express, Lady C was asked about Phillip after 15 people complained to Ofcom over their clash on This Morning.

She said: “Who? Is that something to eat, drink or flush?

“If you are referring to his majesty of the closet… I leave it up to Ofcom to deal with the fact that the public complained about his appalling behaviour towards me.”

She added: “I do not wish to give that creep any more attention than he deserves. As far as I’m concerned, he deserves none.”

What happened between Lady C and Phillip Schofield on This Morning?

During Lady C’s appearance on the programme, Phil told her: “After your Diana book, I would be surprised if any members of the royal family or aristocracy would want to willingly talk and get involved with more gossip.”

The socialite sparked controversy in 1992 when she published an official biography on Princess Diana.

Lady C hit back: “Well that shows how ignorant you are.

“The fact of the matter is that my Diana biography, as People magazine said, was the most believable of all the biographies.”

Lady C said: “Gossip is history in the making or history that has already happened.”

Phil cut in: “But only when it suits you.”

I do not wish to give that creep any more attention than he deserves.

Lady C replied: “No, not when it suits me, when it’s the truth.

Following the interview, Lady C alleged that Phil once tried to shove her at a showbiz party.

She told the Mirror: “I was in a walkway, and Philip Schofield bounced into me, shoved me, trying to knock me down.

A spokesman for Phillip Schofield declined to comment when contacted by Entertainment Daily!.