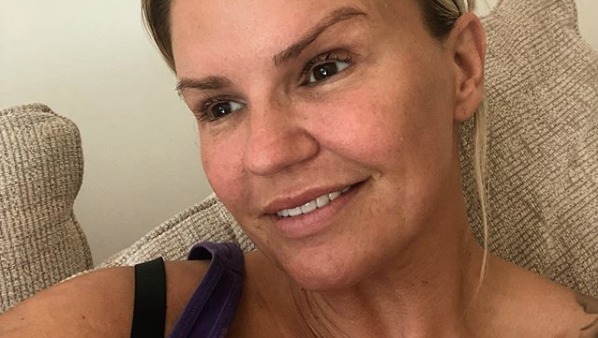 She's undergone surgery to prevent her breasts "dragging on the floor"

Kerry Katona has revealed she is suffering with swollen boobs following surgery to help ensure they no longer ‘drag on the floor’.

Earlier this week the former Atomic Kitten singer underwent her third procedure on her breasts, having told her fans on Instagram she had been ‘tripping over her nipples’ before.

Taking a cheeky dig at her exes, Kerry joked ahead of the op: “I have the best doctor in town!

“But let’s hope I don’t wake up with three [bleep – rhymes with ‘bits’]! I’ve only just divorced them!”

Despite admitting to “a little bit of pain” in the hours after going under the knife, the mum-of-five later revealed her relief at having the procedure as she hailed the medics who had attended to her.

She said on Instagram last night: “So as you all know I’ve had a few nip and tucks here and there over the years which I’m not ashamed about and I’m very vocal and honest about…

“I have just had an uplift with a reduction and a implant put in so that my boobies are no longer dragging on the floor!”

Kerry continued in the post’s caption: “After five kids it’s become a safety hazard 😂😂 am sure you can imagine how swollen I am!

“This is first time after surgery I have ever been given aftercare like this!”

Fans were quick to offer Kerry encouraging words of support.

“Happy healing gorgeous, I don’t blame you one bit, I would do exactly the same as you 🦋,” commented one fan.

“More power to you Kerry. Thankfully in this day and age we can easily access these procedures 🙌😀🙌 once the swelling goes down you won’t know yourself 🙋‍♀️👍,” added another.

And a third remarked: “I always admire how you say it how it is, a spade is a spade as they say. Glad it went well. You look amazing.”

Kerry announced she was going to have breast surgery in her New! magazine column in May.

She revealed: “So the cat’s out of the bra – I’m having a boob lift!

“I was at Harley Street last week to get all the final details in place and I’m so excited.”