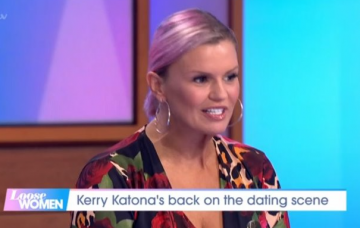 She's trying to find The One

Kerry Katona has opened up about picking the wrong men over the years, but insists her ex-husband Brian McFadden was her favourite partner.

It came as the 38-year-old appeared on Loose Women today (18 February) to talk about her quest to find love on Celebs Go Dating.

Kerry admitted that she had picked men who needed “fixing” in the past because it was a way of avoiding her own issues.

Explaining why 38-year-old Westlife singer Brian will always be her favourite, she said: “Well let’s be honest – have you seen the other two?

“It’s not really a hard choice.”

The Atomic Kitten star’s third marriage was to George Kay but things ended acrimoniously and they split in 2017. Kerry is currently divorcing George.

The star confessed that her venture into the dating world has been very “intimidating” because she has never stayed single for long over the years.

Kerry added of her experience on the E4 show: “I met my first husband at 18. I’ve always committed to a relationship. I’ve been married three times. I’ve never really done the dating thing.”

The mum-of-five also said that her kids have made her promise not to snog anyone on screen to save them from embarrassment!

Kerry has also revealed the qualities she is now looking for in a man.

She shared a message on Instagram yesterday (17 February), which read: “Date a guy who says things like: Drive Safe. Text me when you make it home. I’m proud of you. How much did you say you needed to get you lashes done?”

Celebs Go Dating starts this Sunday at 9pm on E4.

Will you be tuning in to watch Kerry? Leave us a comment on our Facebook page @EntertainmentDailyFix and let us know.