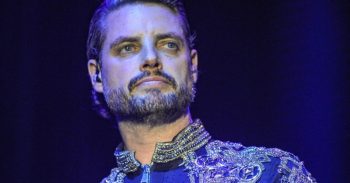 Keith Duffy takes to the stage with Boyzone after being hospitalised

He’s back on stage!

Boyzone star Keith Duffy has rejoined his bandmates on stage in Australia after suffering the “worst bad health experience” of his life in Thailand.

The 44-year-old singer fell ill in Bangkok forcing the rest of the band to head to Australia without him to continue their farewell tour.

However, after revealing he was out of hospital, the band shared a picture to show they were a foursome once more.

He’s back! 💪🏼we are so happy 💚 @officialkeithduffy 🕺🏼#Boyzone

Keith also shared a video of him preparing to go back on stage in Adelaide, Australia. He said: “I can’t tell you how delighted I am to be back. It was such an emotional rollercoaster.

“Glad to have my health back, I don’t know about my fitness. But just to quick word of thank you for all the amazing messages of support and love I got from you. It really, really made me get through a very tough few days.”

Ronan Keating, Mikey Graham and Shane Lynch were forced to perform without Keith in Perth on their Thank You And Goodnight tour, with Shane joking that he was “lost in Thailand”.

The singer suffered a violent attack of diarrhoea and vomiting before he was due to go on stage in Bangkok.

Read more: Ronan Keating says Keith Duffy was on “downward spiral” ahead of being hospitalised

On finally leaving the hospital, Keith shared a picture of himself posing with hospital staff.

He captioned the pic: “72 hours of a fever of 38/40 degrees with diarrhoea and vomiting caused by contaminated food from bad hygiene in preparation!

“The worst bad health experience of my life! A secondary bowel infection and viral infection! These ladies our my saviour. They are saints.”

Have you seen Boyzone perform live? Leave us a comment on our Facebook page @EntertainmentDailyFix and let us know what you think!