After fans said she'd "ruined herself" by having too much cosmetic surgery, Katie Price is reportedly "terrified" that her ears are going to fall off.

The mum-of-five is also said to be suffering "insane" pain after her recent face lift, boob reduction and liposuction on her bum.

It comes after pictures showed the star barely able to open her eyes, with stitches from her face lift clearly visible as she relaxed on holiday with eldest son Harvey, 17. 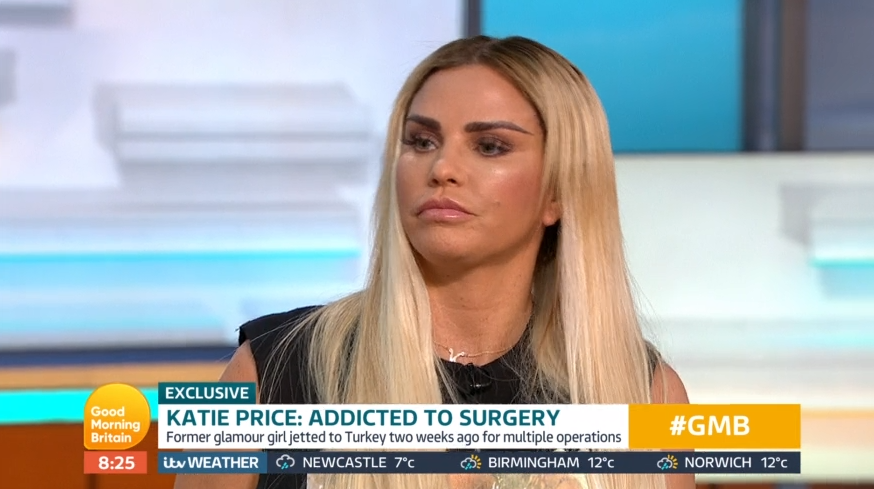 Now a source has told The Sun that she's worried her ears might "drop off".

Surgeons made an incision by Katie's ears to pull her face taut in a dramatic operation to make her look more youthful.

Read more: Holly and Phil in line for a pay rise as "This Morning replaces from Jeremy Kyle"

The work she had done was some intense surgery and she's been worrying that her ears might drop off.

They said: "Poor Katie has been left in an insane amount of pain as the painkillers wear off.

"The work she had done was some intense surgery and she's been worrying that her ears might drop off."

They added: "That won't happen of course, but the agony coupled with sleepless nights have left her freaking out."

Katie's youngest kids are also reportedly struggling to come to terms with their mum's new look.

Sources say Jett, six, and Bunny, five, have found it difficult to see their mum "battered and bruised" after going under the knife.

They added: "Bunny and Jett thought something awful had happened to their mum as she was covered in blood and they could see the fresh scars. They were in tears as she tried to explain to them."

Even the star's mum Amy – who is battling a terminal lung disease – has begged her eldest daughter to go to rehab for her addiction to surgery.

Top surgeons have also warned the star against having any more surgical procedures for fear that she'll ruin her looks.

What do you think of our story? Let us know on our Facebook page @EntertainmentDailyFix.