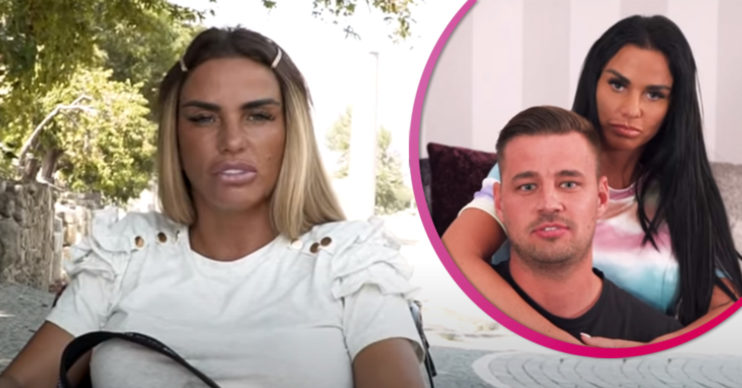 Katie Price is reportedly set to take her relationship with Carl Woods to the next level by attending a red carpet event together.

The couple are believed to have fallen for one another during lockdown.

Katie, 42, has regularly featured Carl in her YouTube videos since their ill-fated holiday in Turkey.

Here Katie broke both of her feet and is now left wheelchair-bound as she recovers.

Carl, 31, has dutifully pushed Katie around in her new blinged out chair ever since.

And despite Katie being warned she needs to rest for her feet to fully heal – she is set to party in London this week.

Katie and Carl are reportedly on the guest list for Thursday’s 10th anniversary of Camden nightclub Shaka Zulu.

A source told The Mirror: “Katie and Carl are planning their first official red carpet this week.

He has dutifully cared for her since her shock accident

“Katie will be seen out in her hot wheels this coming Thursday with her Prince Carl by her side.”

Read more: Katie Price says her feet now look like something out of a horror movie

Since breaking her feet, she was gifted a hot pink electric scooter that she’s zoomed about in trips to the shops.

She also ordered a custom made pink Swarovski rhinestone encrusted wheelchair with her initials on.

In addition to Carl pushing her about, he is also her designated driver.

Katie was served a two-year driving ban in October of last year.

This came after refusing to tell cops who was behind the wheel when her pink Range Rover crashed in 2018.

She told The Sun over the weekend that she finds it “humiliating” to now be considered disabled.

She also said she has re-entered therapy at The Priory to work on her mental health.

Katie said: “Everything has hit me so hard, not only am I in a wheelchair but I have to learn to walk again and I’m disabled. It’s humiliating.

“I feel so embarrassed being pushed around.”

The former glamour model has been warned by doctors that she has life-changing injuries.

They also said she is lucky to have not become paralysed or even killed by the freak accident.

She says she broke her feet after misjudging the height of a wall at the theme park The Land of Legends in Turkey.

Katie lept over the wall only to land disastrously.

Doctors say it could take up to two years until she can walk as normal.