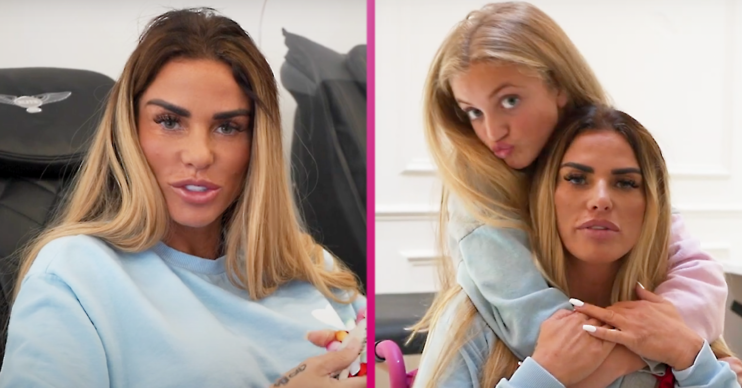 The pictures are just "too graphic" to show

Katie Price has revealed that her damaged feet look like something out of a horror movie – and daughter Princess has agreed with her famous mum.

Chatting in a video on her YouTube channel, Katie and Princess can be seen enjoying a pamper day.

They revealed it was a treat ahead of Princess returning to school.

The mother and daughter got their nails done and had their hair blow dried, with Katie crawling around the floor of the salon to get around.

All the gory details

Sitting in the pedicure chair, Katie opened up about her recent injury.

And the details were more than a little gory.

Read more: Ruth Langsford cries in the shower over death of her beloved sister Julia

Katie was on holiday in Turkey earlier this summer when she broke both her feet.

As a result, it’s been claimed it could take two years for the former glamour model to walk again.

Shall I show them the pictures? No, too graphic.

And now she’s revealed the extent of the scarring.

Chatting to Princess, she asked the 13 year old to explain what her feet look like.

“Shall I show them the pictures? No, too graphic,” Princess started.

“It looks like something out of the movie Saw,” Katie added.

“It does,” Princess confirmed.

Although we’re not entire sure how Princess knows, given that the Saw films are rated 18!

The model also revealed that she’s having her stitches removed from her foot today (September 4).

She said she will be having a new cast on – something Katie said she was pleased about because it was “itchy”.

Katie is now getting about with the help of a motorised pink wheelchair as a result of the accident.

Chatting on her channel, she said: “I have been taking some time off, healing, taking things in. I think things have sunk in really what’s happened now.”

Opening up about her time away from social media, she added: “I’ve needed a bit of me time, family time, kids’ time.”

The model appeared in good spirits during the video and revealed she had a busy time ahead preparing for the kids to return to school.