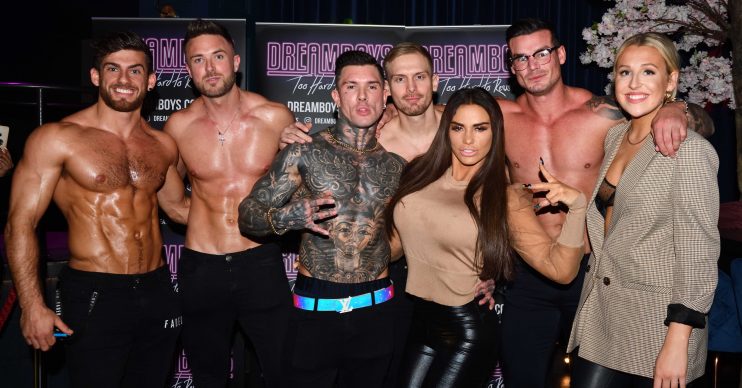 Katie Price gets lap dance as she judges Dreamboys auditions

The former model was a judge at a male stripper event

The mum-of-five, 41, looked ecstatic as a topless dancer grinded up against her.

Photos reveal her smiling away and acting as a judge on the official Dreamboys audition’s panel.

She then snuggled up to all the dancers for several photographs.

According to the event’s official press release, Katie made many jokes during the raucous night, including how she was married to a male stripper herself.

Indeed her third, and currently estranged husband, Kieran Hayler, once worked as a professional stripper.

She apparently also joked about wanting to find a new husband, and apologised to her boyfriend Kris Boyson after receiving the steamy lap dance.

The former glamour model was joined by this year’s Love Island contestant Michael Griffith and former Big Brother contestant Lotan Carter as they searched for “The Next Stripping Star”.

This hosting gig comes in the wake of the star being officially declared bankrupt.

After over a year long battle to avoid bankruptcy, Katie was declared bankrupt by the High Court in November.

Once worth an estimated £40 million, she is now believed to have also lost her £2 million Sussex mansion.

According to the Sunday People, Land Registry documents reveal that she has signed her property over to her trustee.

A source told the publication: “Katie faces being made homeless any day if the property is sold now that the bankruptcy charge has been applied.”

She is believed to now be living with her on and off again boyfriend Kris at his home in Kent.