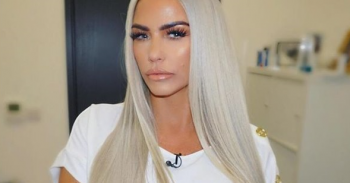 She can now wear tiny sizes

Katie Price recently claimed she had put on two stone, but after going on a weight loss mission she has revealed that she now fits into kid-sized clothes!

The 40-year-old shared a photo of herself wearing a white top, which she confessed was from her new children’s collection.

When a fan asked her about the garment she revealed it was actually made to fit a 14-year-old!

✨Obsessed with this Rose Gold Water Bottle from @nutribuddyuk – how gorgeous is it?! I love everything Rose Gold 😍 Taking this everywhere with me has really helped me to up my water intake – I try to have at least 3 full bottles every day now! The bottle works really well for hot drinks too ☕💕 You can save 10% today code: KPMARCH10 #AD #nutribuddy #rosegold

Katie commented on her outfit: “From my kids range… I’m wearing age 14 here,” along with a laughing emoji.

It comes after the mum-of-five vowed to slim down after complaining she was the “biggest” she’s “ever been” last year.

She complained on her reality show, My Crazy Life: “I’ve put on two stone, feel ugly, haven’t shaved my armpits, look white, hair’s scruff but if that’s what it took to get me to a happier place on the inside, that’s what matters.”

Kate has been promoting weight loss drinks ever since and claims they have helped her to shed the pounds.

But she received mixed reviews about her diet promotion, with some insisting she was putting out an unhealthy message to young fans.

#ad Results are in! Another round of @boombod done, and THIS is why I keep coming back. It just works! Their 7 day achiever program is quick, easy, and the shots taste great – trust me, if you’re fussy that matters💁😂 For everyone asking me about health & weight loss tips, this is always my go-to. Check them out!

The former glamour model was also forced to deny she was pregnant again after rumours began circulating earlier this month.

Katie then showed off her slim figure while on holiday in Thailand with boyfriend Kris Boyson last week.

She posted that her tan was “coming along nice” on Instagram, but followers thought she just wanted to reveal her slimmed-down bod!

Katie has also been able to enlist the help of fitness trainer Kris to get healthier.

The pair were seen paddleboarding and kick boxing during their Thai trip.