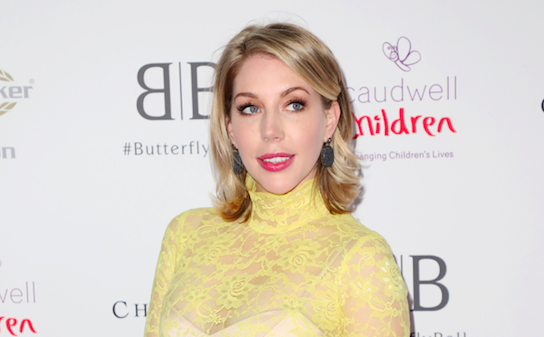 Katherine Ryan reveals a masked man broke into her home

Her boyfriend had to fight the intruder off

Comedian Katherine Ryan has revealed a terrifying ordeal that happened at her home on Saturday night.

The Canadian Your Face or Mine host, 36, shared the shocking details on her Instagram stories.

She explained how she was home with her boyfriend on Saturday night when a masked intruder broke in.

Sharing a picture of police at her home she said: “Cool to be robbed tonight by a masked man in our home.”

She explained that a man had broken into her London home and her boyfriend Bobby had fought him off.

Is there a way to circulate this foreshadowing ring around pawn shops that the masked man stole before he was tackled into the street? pic.twitter.com/XGZP6eJOsN

She described how he ‘wrestled’ the intruder and rescued her laptop back which contained the script of her Netflix series.

She said: “This is why I love Bobby K because he got in a fight and wrestled back my Netflix series and scripts.”

She added “that’s blood” as her camera zoomed in on blood splatters on her Mac laptop.

Read more: Ruth Langsford reveals her rescue dog is on the mend

Katherine later joked about her little black poodle being asleep on the sofa, and coined her pooch the “worst guard dog.”

This was followed up by a clip of her three little dogs, captioned: “Literally getting a German Shepherd thanks to you [bleeps].”

She also shared a picture on Twitter of a ring stolen during the robbery, and wondered if anyone would notice it in pawn shops.

Mum-of-one Katherine has been dating boyfriend Bobby since early this year.

The pair were childhood sweethearts but began dating again after twenty years apart.

She says they bumped into one another by chance as she visited her homeland Canada and decided to give their relationship another go two decades on.

She told The Sun: “He was the first one and he really, really badly broke my heart when we split. We didn’t speak for two decades.

“I’ve always been a believer you should never go back but you have to make an exception when you’ve spent 20 years apart.

“I’ve heard that all your cells in your whole body are different every seven years, so you become a completely new physical person.”

Katherine is writing and starring in her own Netflix series, The Duchess, about a single mum living in London. The release date remains unknown.

What do you think of this story? Tell us your thoughts on our Facebook page @EntertainmentDailyFix.