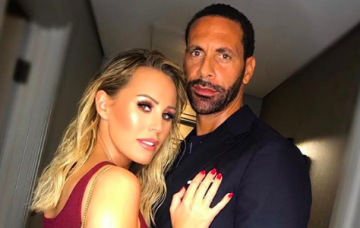 Kate Wright opens up about the special love for her stepchildren

She speaks about her experience of motherhood

The 27-year-old, who has been with Rio since 2017, spoke about taking on the role after the children lost their mum Rebecca Ellison to cancer in 2015.

She posted some sweet messages about the love she felt for his three kids, Lorenz, 12, Tate, 10 and seven-year-old Tia.

She shared a snap of her walking along with Tia in matching outfits on her Instagram Story and wrote: “Who knew love like this existed.”

She also expressed her feelings about motherhood with her fans.

Kate explained that, for her, being a mum is a state of mind and not just “biological”.

The ex-TOWIE star added in another post: “Being a mother is an attitude, not a biological relation.”

Kate is also in the middle of planning her wedding to 40-year-old Rio.

He proposed during their holiday with the children in Abu Dhabi in November.

Kate has fully embraced becoming part of Rio and his kids’ lives since they began dating.

She has moved into their family home and she also recently posted about cutting “toxic” people from her life as she gears up to marry the retired footballer.

Kate also explained that it was a “hard” but “fun” 2018 for them on her Instagram Story this week.

The Essex girl previously spoke about her desire to give her stepchildren as happy a life as possible after all they have been through. Rio also lost his beloved mum Janice to cancer in 2017.

Speaking about her decision to leave the limelight and take on a family, Kate said on This Morning last year: “Everyone thinks I’m crazy, even my mum was like, ‘You’re mad!’ But I had two choices. I was in this world of drama and in the public eye.

“Then I met Rio, he had children who lost their mum, they didn’t have a woman in their lives. Someone needs to be at home and give them love.”

What do you think of Kate’s message? Leave us a comment on our Facebook page @EntertainmentDailyFix and tell us.