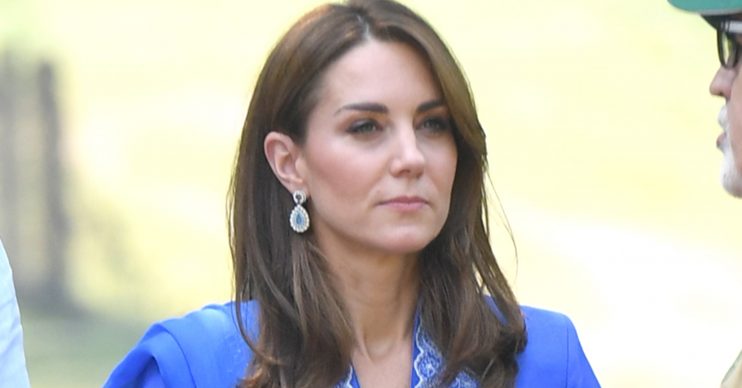 The Duchess of Cambridge suffered an awkward moment when a handshake with a soldier went slightly wrong.

Kate and husband Prince William are on their royal tour in Pakistan and visited the capital Islamabad on Tuesday.

The mum-of-three looked stunning in a traditional blue kurta and scarf as she and William were greeted by the soldier, who first saluted to the Duke and shook his hand.

Read more: Prince William pays tribute to his mother as he and Kate continue their royal tour

But as Kate went to shake the soldier’s hand, he went straight for the salute and awkwardly left Kate hanging for a few seconds.

After he saluted, the soldier quickly put his arm down to shake her hand.

Of course, Kate handed the mishap like a pro and smiled until he completed the salute and shook her hand.

The royal couple then headed inside to begin their engagement, which was to learn about the Teach for Pakistan programme – a fast-track teacher training programme modelled on the UK’s Teach First scheme.

Kate’s choice of outfit mirrored her late mother-in-law Princess Diana, who was pictured wearing a similar look during a visit to the country in 1997.

The couple visited the Islamabad Model College for Girls and spoke to some of the pupils.

William was told the girls were “big fans of your mother”.

Oh that’s very sweet of you. I was a big fan of my mother too.

William and Kate then attended a reception at the Pakistani Monument near Islamabad in the evening.