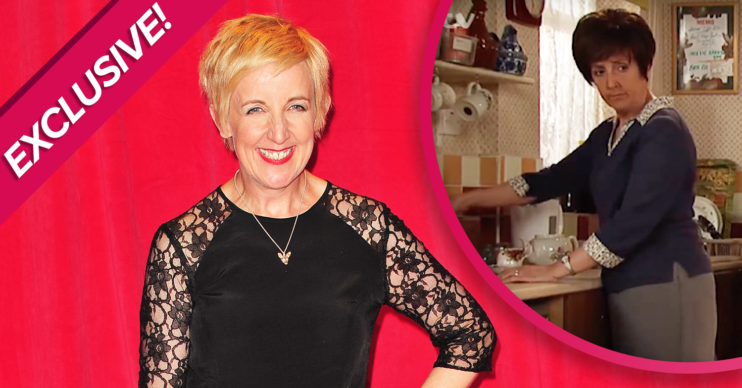 The actress has "moved forward" in her life

Julie Hesmondhalgh may have left the Coronation Street cobbles six years ago but she has revealed she still watches the show “religiously”.

Speaking exclusively to Entertainment Daily, Julie revealed she was pleased her character Hayley Cropper didn’t leave in a taxi.

Instead, she told us she knew “Hayley would have to die”.

Opening up in an exclusive interview, Julie revealed: “When I said I was going to leave Corrie, I knew the door wasn’t going to be left open. Because Roy and Hayley would never split up.”

What did Julie Hesmondhalgh say about Hayley’s exit?

“So unless David [Neilson] was ready to leave as well, which he wasn’t, Hayley would have to die,” she added.

However, Julie still has huge ties to the show that made her a household name.

“I love that programme,” she said. “I still watch it. My husband [Ian Kershaw] is a writer on it. I watch it religiously, I absolutely love it, but my time on it has definitely ended.”

Julie was last seen on our screens as Hayley in January 2014, when the character ended her own life as she battled terminal cancer.

The actress said: “Honestly, that storyline, that beautiful storyline they gave me, the long ending, realising that she had pancreatic cancer… It was really affecting for people.

“There was a big campaign of awareness around pancreatic cancer and the right to die movement around that, and it reinforced my belief that soaps can really, really change things – change people’s way of thinking.”

I love that programme. I still watch it. My husband is a writer on it. I watch it religiously, I absolutely love it, but my time on it has definitely ended.

That wasn’t a new thing for the character, though, who arrived on the soap “with a massive splash” because of her trans storyline.

“I knew there was a massive responsibility to do it well and do it right,” she said.

“What people don’t remember is that I came into Corrie with a massive splash because of the trans storyline and I ended with this huge, beautiful and tragic story. In between there were many years of me just pootling round the cafe or the knicker factory.

“Had I just left in a taxi, I just don’t think it would have had the same impact in any way.”

No regrets over leaving

Julie certainly has no regrets about leaving the ITV soap, though. She told ED! she “wanted to do other things, and I have”.

“I’ve had a really rich and successful career post-Corrie, in theatre, in telly, in film, in radio. And so I have moved forward in my life, in that way.”

At the moment Julie is filming new BBC Wales drama The Pact.

“I just feel incredibly lucky. Our industry, the TV and film industry, and the theatre industry in particular, has been really suffering and it’s very hard for people,” she said.

“I had this job at the beginning of lockdown. I was supposed to start it in March, I was going to be doing it until the summer.

“It was the day before lockdown that it got cancelled and postponed, so I had this unbelievably lucky position of knowing, or pretty much knowing, that this would continue at the end of lockdown. So that took the pressure off me enormously,” she added.

Lockdown wasn’t without its pressures at home, though, Julie said.

Mum to teenage girls Martha, 19, and Lyss, 16, the actress revealed lockdown was tough on her daughters.

“We’ve certainly not been immune to mental health issues in our family, I don’t think any family with young people in it has.

“The pressure that young people are under is there for anyone to see. This year, for example, my daughter was supposed to take her A-Levels and, along with their friends, they had the anxiety about the government’s algorithm, and what it would mean for them.

“Actually, my daughter was okay, but a lot of her friends lost places at university. Some of them got them later, but in the time when they didn’t it was incredibly stressful. The future seemed so uncertain and everything they’d worked towards had been ripped away from them.”

She added: “We talk about mental health a lot at home. What I’ve realised is it’s very important, and this is a lesson you’ll learn as a parent – if your child doesn’t seem good, doesn’t seem well, don’t write it off.

“It’s better to be overly concerned, to properly sit them down and look them in the eye and say: ‘Are you okay, you don’t seem okay today… what is it?’ Because it’s so easy to write it off as hormones, it’s teenage moods, we all do it. But you don’t know what’s going on beneath the surface.”

‘Kids will fight you to the death about it’

One thing Julie enforces at home is no phones in the bedroom at bedtime.

“They will fight you to the death about it,” she laughed. “But it’s that thing of never being switched off. It’s a horrible thing.”

Speaking about online bullying, Julie added: “There’s so little protection in place in terms of what they can see and how they can communicate with each other.

“Whatever it is that makes young people victimise someone, you have a platform to do that with social media. It’s so wide and with such a reach. For parents it’s terrifying and you’re always at a bit of a loss to know how to deal with that.”

She added: “The jolt of reading something online that’s negative, it’s a horrible sort of adrenaline. That fight or flight that kicks in when something like that happens. Young people are getting that.”

As a result, Julie has been working with youth suicide prevention charity Papyrus, working on its Bedtime Stories campaign.

“My story is about self harm and being exposed to websites that encourage that as a coping mechanism and how easy it is to be drawn into that as a young person,” she said.

Julie added: “It’s a very tricky thing because there’s a massive difference between talking about mental health and suicide, talking to young people about it – which is absolutely proven not to cause suicide and mental health problems – and watching things and being exposed to things that encourage those thoughts and feelings. The two things are very different.

“Even before lockdown there was an awareness that we’ve given this massive and powerful tool to our children from a very very young age – a phone, through which they can access so many things,” she said.

“And there’s so little protection in place in terms of what they can see and how they can communicate with each other.”

To find out more about Bedtime Stories, visit the website here.