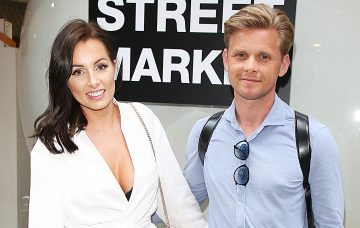 They tied the knot in September last year

Jeff Brazier is enjoying his honeymoon in Cuba with his new wife Kate Dwyer.

The couple tied the knot in Portugal in September last year and Jeff said at the time he “couldn’t be happier” to have Kate as his wife.

Now, Jeff and Kate have jetted off on their honeymoon to Havana, Cuba, and have shared a string of envy-inducing snaps of their Caribbean getaway to social media.

So this is what a honeymoon feels like! Time to celebrate our future and relax in our first honeymoon destination of #Havana #Cuba @kempinskihavana

Earlier this week, Jeff shared a snap of himself lounging in a rooftop swimming pool overlooking the city.

Jeff revealed Cuba is their first honeymoon destination, hinting they could be travelling to other places too.

He wrote: “So this is what a honeymoon feels like! Time to celebrate our future and relax in our first honeymoon destination of #Havana #Cuba.”

Jeff also shared a couple of pictures of himself and Kate exploring the beautiful city.

One snap sees Kate wearing a red patterned dress as she strolled around the city, facing away from the camera.

Jeff also posted videos and photos to his Instagram Stories of their trip.

The dad-of-two captured one snap of Kate resting her arms on a balcony as they enjoyed a lunch date at a restaurant called Paladar Los Mercaderes.

He wrote: “Lunch date at the @paladarlosmercaderes,” followed by a kiss face emoji.

But it seems it wasn’t long before their alcoholic drinks began to kick in.

He shared a sweet photo of the couple holding their cocktails.

Jeff wrote: “When you unexpectedly end up leaving the restaurant slightly drunk. Cheers.”

In another snap, Kate hid her mouth with her hand as Jeff joked: “Don’t be fooled by the fanta can. #lashed.”

He then posted a snap of Kate laughing while strolling around Havana.

The star joked: “Stop having fun. What do you think this is? A honeymoon?”

Their romantic trip comes five months after their big day.

The couple’s wedding was exclusively covered by Hello! Magazine and Bobby, 15, and Freddy, 14, were their dad’s best men at the ceremony.

Last year, Kate opened up about being a stepmum to Jeff’s two sons.

She said on Instagram at the time: “There are good days and bad days and in all honesty I am still learning to be better every single day of this #stepmum journey.

“But, this was without a doubt the single most special moment of my life with these boys so far.”

Where did you go on your honeymoon? Leave us a comment on our Facebook page @EntertainmentDailyFix and let us know.