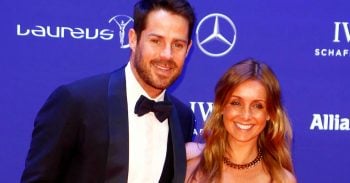 They spent a day out for their son's special achievement

Jamie and Louise Redknapp may now be divorced, but they have shared the same family moment while out for the day with their son Charley.

They spent the day together and both gushed about their son playing his first game for the under-15s Surrey rugby team at the weekend.

Retired footballer Jamie, 45, and singer Louise, 44, both said how “proud” they are of their eldest boy on social media.

Alongside a pic of 14-year-old Charley on the rugby field, Louise wrote: “Couldn’t be more proud, first game for Surrey played and he smashed it love you ❤️.”

Couldn’t be more proud, first game for Surrey played and he smashed it love you ❤️

The parents were both at the event to watch Charely’s first match and Jamie put up the same picture as Louise on his Instagram Stories.

Jamie raved: “Proud of you @charley_redknapp and Jamie Yorke mates since they were 5 years old

Their day out together comes after a recent report claimed they have been growing closer.

Earlier this month, a source revealed that the pair are ‘enjoying flirting’ again.

Jamie and Louise divorced in December 2017, after 19 years of marriage.

A source told Woman magazine: “There is a spark there now which he hasn’t seen since the very early days – way back when she was in Eternal.”

The gossiper added: “Frankly, Jamie fancies the pants off her again. Maybe it’s the forbidden fruit thing, but he’s enjoying flirting with a beautiful brunette. It cheers them both up.”

Ent Daily contacted reps for Jamie and Louise for comment at the time of the story.