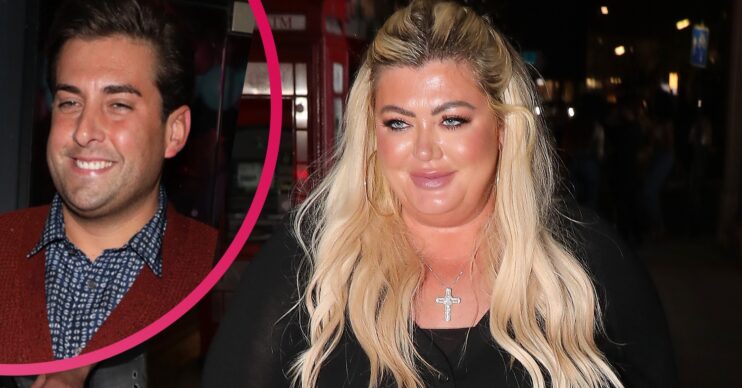 Is he having a laugh?

James Argent jokingly begged Gemma Collins to call off her engagement to Rami Hawash during out a night out with his friends.

Gemma‘s ex-boyfriend Arg, 34, grinned as he held up a sign reading ‘GC call off the engagement!!’ after hearing news of her engagement to Rami.

But it seems Arg was just fooling around with his mates.

He was at the PDC World Darts Championship at London’s Alexandra Palace.

Jack Tweed, the former husband of Jade Goody, was out with Arg and was pictured pointing at the sign and laughing.

The pair and other friends were obviously having a fun night out.

Looking fit and healthy Arg, who lost 11 stone after a gastric band op, seemed to have put his troubles behind him.

However, the on/off relationship with Arg ended for good last year.

Gemma called time on their romance after Arg reportedly asked for an open relationship.

So when did Gemma Collins announce her engagement?

The pair rekindled their romance at the end of 2020 and recently became engaged for a second time.

She told the Times this week how she’s waiting for Rami’s pending divorce from his wife to complete.

She explained: “We can’t really come out and say anything yet because Ram was married before and his paperwork has not come through, so until that’s officially signed, we’ve not said anything.

“They’ve not been together for two years. I know her, she’s got a partner, she’s as good as gold.”

Rami also has a child to think about.

Gemma revealed: “There’s a child involved, he only three and obviously I love him to death. But until that paperwork’s signed I can’t ‘come out’.”

Despite that, Gemma seems to have announced it to the world.

The pair are reportedly going to marry sooner rather than later.

The Sun reported that she’d admitted she’s been speaking to her mum about the impending nuptials.

Rami, originally from Israel, surprised Gemma at Christmas with an amazing gift.

He is set to take Gemma on a holiday to Bethlehem and Israel.

Gemma shared with her 2.2 million Instagram followers how she felt about Rami.

She wished him a happy Christmas adding: “Thank you for making my life so complete.”

What do you think of Arg’s message? Head over to our Facebook page @EntertainmentDailyFix and let us know.