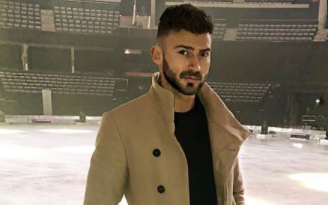 Jake Quickenden has moved fans by sharing a poignant family photo taken when he was a little boy.

The holiday snap posted on Instagram shows the Dancing On Ice star with his late father and brother, who sadly passed away in 2008 and 2012 respectively.

Sharing the picture to mark National Siblings Day, Jake wrote: “Far left is my big bro and my best mate, he was my father figure after my dad passed away and he is an amazing dad himself.

“Me in the middle, absolute little [bleep], my old man, love you and miss you, and then my little bro. I only shared 19 years with him but he was the most amazing person a true fighter and the funniest guy I ever knew… I miss him every day…”

He added: “We must cherish the people we love… and finally my mum @lisaquickenden my rock and my biggest supporter… she’s bailed me out of some pretty bad situations, love you all millions!!”

Many of Jake’s followers said they were touched by the throwback photo and his message, with some revealing they also knew how it felt to lose a loved one.

“Lovely family pic. Lost my dad 15 years ago and still miss him. I’m sure yours is looking down on you and so proud of everything you’ve achieved,” one wrote.

Another said: “I lost my best friend at the tender age of 19 also to leukaemia and lymphoma. I was devastated.”

Others said their thoughts were with Jake, with one writing: “My goodness what a touching post…. life definitely doesn’t deal the cards evenly.”

Meanwhile, dozens more were struck by how much Jake, 29, looks like his dad, Paul, who died of bone cancer in his early fifties.

They’ve been struck by the resemblance when Jake has previously shared old photos.

Jake lost his brother, Oliver, to cancer four years after their dad’s death.

He has previously expressed his sadness that his father and brother never got to meet Danielle Fogarty, who he will marry later this year.

“They would love Danielle. But I’m a firm believer they are with me every day. We have two massive pictures of my dad and brother, and they’ll be there at the wedding. And we will do special drinks that they liked,” he told The Mirror.

The former X Factor and I’m A Celeb star was delighted to win Dancing On Ice last month with his professional skating partner Vanessa Bauer.

Since then, he’s continued skating on the DOI tour, where he’s also sung for the crowd.

Many of his fans commented on his family picture that his dad and brother would be so proud of everything he has achieved.