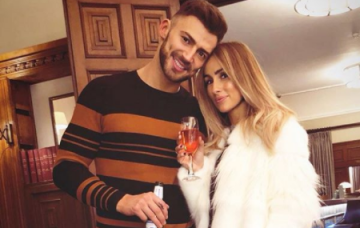 They're "taking a breather", according to unconfirmed reports

Jake Fogarty and fiancée Danielle Fogarty are making headlines today amid unconfirmed reports they have called off their wedding for now.

Neither Jake nor Danielle has addressed the allegations in The Sun, which claim Jake’s very busy work commitments following his win on Dancing On Ice put a strain on their romance.

A representative for Jake had “no comment” when approached by ED!

If the news is true, it will come as a shock to fans, as Danielle was seen in the audience each week at Dancing On Ice cheering Jake on, and just three days ago sent him a sweet message on Twitter.

She told him: “Enjoy your last day @JakeQuickenden on this insane, amazing journey you have had@dancingonice @DOI_Tour something is telling me though this isn’t the last of your skating career see you later.”

After Jake won the competition in March, she shared a picture of them with his trophy writing: “Words cant express how proud I am of you @JakeQuickenden you are an absolute champ!!

“You smashed that final and 100% the right person won. @TheVanessaBauer thank you so much as he couldn’t of done this without you, also to all his supporters and fans.”

The speculation comes as a big surprise as the pair, who live together in Cheshire with their dog, appeared to have been happily preparing for their wedding.

Jake and Danielle met three years ago after he appeared on I’m A Celebrity with her dad, motorbike champ Carl Fogarty.

The X Factor star popped the question last September and both have been vocal about how they can’t wait to tie the knot.

In February, Danielle posted a picture on Instagram of the pair wearing “his and hers” monogrammed jumpers, where her initials had already been changed to reflect her married name.

She wrote: “His and hers… yes I know I’m not DQ yet but these jumpers are getting me so excited.”

Jake had also seemed excited about the wedding during his time on DOI, saying he attended to invite the friends he had made on the show to the big day.

“I’ve already started inviting everyone. It’ll be at the end of the year. Danielle’s looking for dresses. She’s doing most of the organising as she’s the boss,” he told The Mirror.

Jake regularly paid tribute to Danielle for supporting him, sharing pictures of them together after the live shows with his Instagram followers.

In February with a picture of them looking at one another lovingly he wrote: “What a night…. thanks for all the support it’s so appreciated… can’t actually believe it, I’m having so much fun!! @danielle_fogarty1 always supporting!!!” with heart emojis.

And after one of the first shows in January, he shared another sweet snap of them saying of Danielle: “She’s always got my back and I love her for that!!”

But according to The Sun’s source, it hasn’t been easy for couple recently, as Jake has been working around the country on the Dancing On Ice tour, and next up he will be on the road again with The Dreamboys strip group.

“They’ve both decided to take a breather,” the source alleges, claiming the decision was made on a recent trip to Rome.

“They are now in the UK and are spending time with their families. The wedding is very much off for now.”