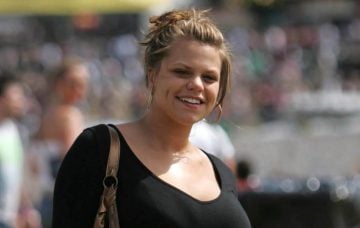 In a heart-wrenching interview with the Mirror, Jackiey revealed she still takes comfort from her late daughter’s nightgown and claims it still smells like the Big Brother star.

“It gives me strength,” she says of the nightgown. “It still smells of her. I often put it in my bed. And when I have it I feel close to my Jade again.”

Jackiey also said she was the one who took care of Jade’s body after she passed away – a task she now regrets taking on.

She claimed that at the time she wanted to be the one looking after her daughter, but that the experience had left traumatic memories she still struggles with today.

“I brought her into life so I took her out of it and that’s why I did it. I don’t regret it but the image won’t leave me,” she said.

Jade died of cervical cancer at just 27 years of age. Her death led to a campaign to raise awareness of the importance of cervical screening tests.

The NHS currently recommends women start getting regular smear tests from the age of 25 – and Jackiey believes that is too late.

Read more: Katie Price says her mum is “deteriorating” but is set to get her one wish before she dies

Following Jade’s death, her mother campaigned to have the age lowered to 21 and gathered a petition of over 15,000 signatures, delivering it personally to 10 Downing Street.

Despite her efforts, the age remains the same. However, she claims she is proud that Jade’s legacy helped raise awareness.

While she’s struggled to overcome her depression in the years since her daughter’s death – and even tried to take her own life in 2012 – Jackiey is determined to be there for her grandchildren. They live with their dad Jeff Brazier.