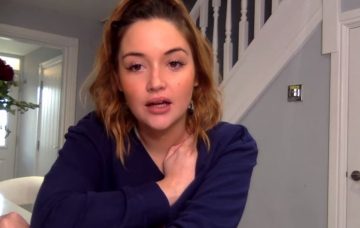 Could she change her mind, though?

Jacqueline Jossa has revealed she’s turned down both Strictly Come Dancing and I’m A Celebrity… Get Me Out Of Here!

It was a firm ‘no’ to ever doing Strictly… but I’m A Celeb could be a possibility one day!

Jacqueline, 25, explained she can’t dance, so Strictly would be a disaster, but turning down I’m A Celeb was purely because of scheduling conflicts.

She said: “I’ve been asked to do Strictly Come Dancing but I can’t dance so there’s no way I would embarrass myself by going on that!

“I was asked about doing I’m A Celebrity… Get Me Out Of Here! last year, but I couldn’t do it as I was still contracted to EastEnders.”

Well, Jacqueline’s character Lauren Branning has now bowed out of Walford, so could she now say ‘yes’ to the jungle if she’s offered it again?

“I would definitely consider it in the future but I don’t know if I could leave my family for that long.”

Jacqueline and husband Dan Osborne, who found fame on TOWIE, are parents to daughter Ella, three.

They have a second baby on the way this year.

Now that Jacqueline has left EastEnders, she’s trying her hand at vlogging, uploading her first video to YouTube over the weekend.

She told fans she’s keen to explore further opportunities in acting, after losing her “passion and drive” following eight years on EastEnders.

However, it’s on the backburner until her second child is born.

“Obviously at the moment I’m kind of stopped in my tracks baby-wise but I definitely feel that fire now,” she said.

“I so want to be acting and doing something new. I’m really ready and prepared for this new adventure of mine and I’m really excited about it, kind of how I felt before I was in EastEnders.

“I had that buzz about acting and I kind of think I lost that a little bit. Not because of anything in particular, but I just think because I got lost in it and I’d been in EastEnders eight years. I’d had a baby in that time. And somewhere on the way I lost the drive and passion I had for it.

“This has really helped me get that back. After baby number two I will most definitely be resuming back into acting – maybe even some singing!”

Meanwhile, she also spoke in the YouTube video about which EastEnders character she’d like to be other than Lauren.

“I would like to be Ian Beale’s son or daughter as then you’re a Beale!” she laughed.

“I don’t know why I have this obsession with Ian Beale, I just love him! He’s been in the show 33 years.

“Adam [Woodyatt, who plays Ian Beale] used to call me his honorary Beale which was enough for me. And I did go out with both the Beales and had a baby with one of them… and my sister had a baby with the other one!”

Do you want to see Jacqueline in the jungle? Leave us a comment on our Facebook page @EntertainmentDailyFix and let us know what you think!