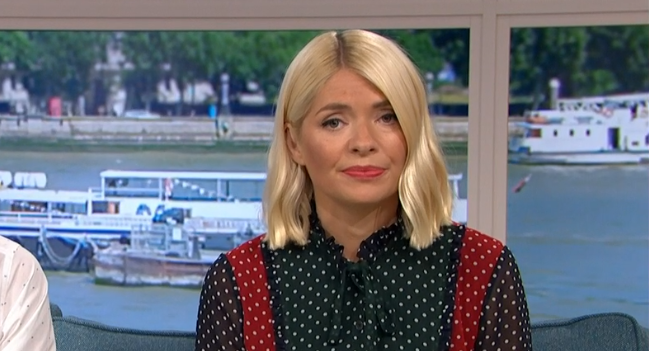 Holly Willoughby fans baffled by her latest This Morning outfit

Many people have pointed out the same thing

Fans have been left confused by Holly Willoughby‘s latest outfit for This Morning.

Read more: Raging This Morning fans slam mum of teenager who went blind from only eating crisps and chocolate

The star posed in the dress in front of a This Morning sign before Wednesday’s edition of the programme.

Fans, of course, gushed over the stunning outfit but some people had noticed something about the dress.

Many pointed out that it looked like the mum-of-three was wearing a red rucksack as the dress featured two red and white polka dot panels next to her arms.

One person commented: “I thought Holly was wearing a rucksack at the train station #needmoresleep.”

Another wrote: “You look lovely as always but it looks like you’re wearing a backpack.”

A third added: “Thought you had a rucksack on at first glance, always beautiful.”

A fourth said: “Looks like you are wearing a rucksack lol.”

Meanwhile, on Tuesday’s show, Holly left fans in a frenzy with her animal print dress.

The presenter opted for a stunning & Other Stories leopard print mini dress with long sleeves with a pair of black boots.

One fan gushed: “Beautiful. Where is the dress from?! I love it!” while another said: “Wow gorgeous!!”

This Morning duo Holly and Phillip Schofield recently celebrated a decade of their partnership on the daytime show, and Phil said: “I’d be quite happy [to continue], so long as I’m in good health and Holly is too.

“It’s always adapting and changing, so I think as long as it continues to do that and know when it’s serious and know when its not taking itself too seriously, there’s no reason why it can’t be around for another 10 years, or another 20.”