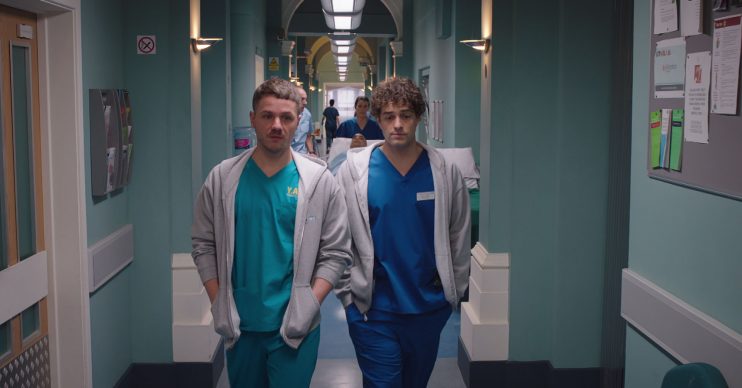 Dom has been through a lot recently

It looks like there’s drama heading for Holby City as Lofty returns tonight with a secret.

Fans know that Dom’s husband Lofty has been away for the past few weeks in the States.

However, Lofty is unaware of the family drama Dom has been facing while he’s been away.

Although Dom is happy to have his man home, all is not as it seems.

Lofty explains to Dom that he’s hurt by his distant behaviour over the past few weeks.

Wanting to be honest with his husband, Lofty attempts to speak to Dom about something else on his mind, but is stopped when he learns the truth about Ange.

Realising what Dom has been going through, Lofty decides to keep things to himself. However, this doesn’t appear to be the best move as he struggles to control his emotions later on in his shift.

Donna notices his strange behaviour and she urges him to open up.

Lofty shocks Donna by revealing a big secret, but what is it? Could it be to do with Isaac Mayfield’s return?

In the Holby City spring trailer, it was revealed that Dom’s abusive ex Isaac would be making a comeback.

Read More: Bodyguard named as most-watched drama of the past decade

Fans will know that Dom and Isaac met on a drunken night out and the pair soon began a relationship.

However, Isaac turned violent and abusive towards his boyfriend and the relationship ended after Dom fell down the stairs while being threatened by his partner.

Isaac was fired after Dominic reported his abuse to the police.

Speaking to Digital Spy, Mark Elliott, who plays Isaac said: “The appearance of Isaac in that first episode is that he is reformed.

“He’s deeply remorseful of the pain he’s caused Dom in the past. He’s been in prison and whilst he’s been there, he claims he has also suffered abuse at the hands of people inside with him.”

He then added: “I think he is very sorry for his behaviour, and how that has impacted on Dominic. He wants to make amends. But ultimately, I think there could be more to it.”

What do you think Lofty’s secret is? Leave us a comment on our Facebook page @EntertainmentDailyFix and let us know what you think of this story.