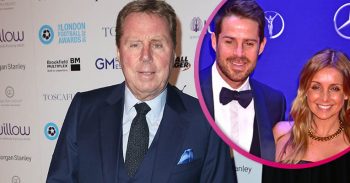 He said he still "loves" Louise

Harry Redknapp has admitted he still “loves” his former daughter-in-law Louise despite her split from Harry’s son, Jamie.

The I’m A Celebrity winner, 71, said he was “sad” when his son split from Louise.

When asked if Jamie is enjoying single life during an appearance on Heart Radio, Harry said: “I dunno. I’ll leave it to his mum. [Sandra] asks him them questions. I don’t get involved.”

Host Jamie Theakston added: “Do you not have relationship advice between the two of you?”

Harry replied: “I sort of try to avoid it. I just let him get on with it. What can I do now, you know?

“I mean I love Lou and I was sad when it all went wrong. I really was. Me and Sandra absolutely loved her.”

.@JamieTheakston and @LucyHorobin ask Harry @Redknapp how his son Jamie Redknapp is adapting to life as a single guy pic.twitter.com/ahpeFQKkLK

“Sandra talks to her mum all the time. She’s lovely. So yeah, it was sad. But that’s life.”

It comes after a report claimed Louise and Jamie were growing close again.

However, a source told Woman Magazine earlier this month: “There is a spark there now which he hasn’t seen since the very early days – way back when she was in Eternal.

Last month, Louise spoke about her relationship with Jamie during an appearance on Heart Radio.