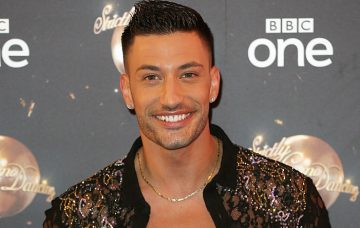 Strictly Come Dancing professional Giovanni Pernice has said it’s “nonsense” to suggest dancers and celebrities could be secretly hooking up behind the scenes.

The dancer, 28, was reacting after former Strictly pro Gleb Savchenko suggested things happened behind the scenes that viewers weren’t aware of.

Gleb had given an earlier interview about relationships between professionals and celebrities, after Katya Jones and Seann Walsh were caught snogging on a night out.

Thank you SO much to everyone who voted for us this week!! Another week with this legend!! @pernicegiovann1 @bbcstrictly #teamg&t #livingthedream

Gleb had told The Sun: “We’ve seen Seann and Katya making out outside a bar and if you asked me if I think people like Giovanni and his partner or any of the others are making out when no one is seeing it, I cannot answer that question. It could well be happening.”

Well, Giovanni CAN answer that and said it was rubbish!

Giovanni, who is paired with married Faye Tozer, 42, told The Sun: “This is total and utter nonsense! No one has any idea why Gleb is saying stuff like this. It’s utter rubbish.”

Gleb was a professional dancer on the 2015 series of Strictly, where he was paired with Anita Rani. He’s also taken part in MasterChef and Celebs On The Farm.

He’s currently serving as a pro on Dancing With The Stars, the US version of Strictly.

His comments came after Katya and comedian Seann were forced to apologise after being pictured kissing on a London street.

Seann was subsequently dumped by girlfriend Rebecca Humphries while Katya has insisted all is well between her and husband Neil Jones, who is also a Strictly professional.

Seann later said on It Takes Two: “I think that, obviously I’m sorry for the hurt that I’ve caused. We were getting on well, we were having fun. We had a couple of drinks and we made a huge mistake and I regret it deeply.”

Katya said: “Obviously I apologise, and I can’t apologise enough to everyone who it hurt and involved. But, the main thing for me is that me and Neil are absolutely fine and that’s what matters to me the most right now and focusing on my job and doing it as professionally I can.”

Of course, there have been stories of professionals and celebrities getting together during the show and we’ve all heard of the infamous Strictly ‘curse’.

However, Giovanni objected to the idea he could be hooking up with his married colleague. And quite rightly!

Meanwhile, in other Strictly romance news, it was confirmed on Friday that pro dancer Dianne Buswell has split from Emmerdale actor boyfriend Anthony Quinlan.

Dianne’s rep told ED!:  “Due to their busy schedules and distance they have split but still remain really close friends”.

What do you think about the Strictly ‘curse’? Leave us a comment on our Facebook page @EntertainmentDailyFix and let us know.