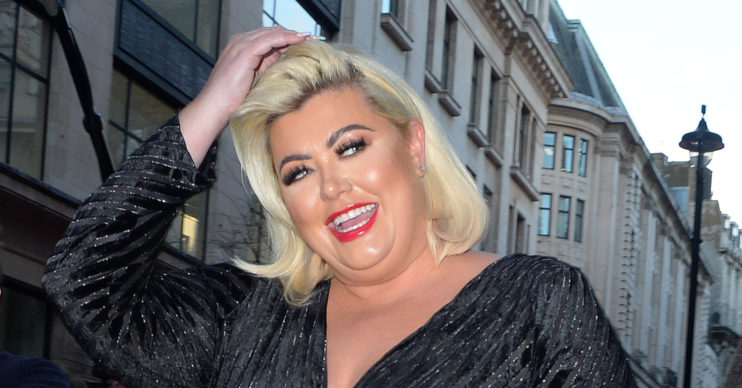 The fashion designer, 39, is pretty in pink as she pouts on the front of the coveted high fashion magazine.

And her look is even topped off with a tongue in cheek headline: “The GC From Dagenham to the Dorchester.”

However, not all is as it seems. Gemma may look fantastic in the snap, but it is part of a popular social media trend.

The Vogue challenge invites users of Instagram and TikTok to pose in front of a mock Vogue cover.

The trend evolved in response to the British Vogue edition dedicating its July issue to key workers during the coronavirus pandemic.

‘Less is more more or less’

Her celebrity pals and fans alike flocked to praise her stunning cover.

One fan gushed: “Love you Gemma. My inspiration.”

And another quipped: “I would’ve changed the caption to: ‘I’m claustrophobic Darren’ but that’s just me.”

‘Get her on Vogue now’

A third wrote: “Gemma is an icon and I can’t cope.”

And a fourth urged: “Get her on Vogue now.”

Gemma has lost an impressive three stone over the last year or so.

The plus-sized fashion designer opened up about her weight gain and loss struggles recently.

Also addressing her some 1.8 million Instagram fans, she discussed her PCOS battle.

The reality star says she suffers from polycystic ovary syndrome which can cause weight gain.

She shared a photo of her on holiday in her twenties looking significantly slimmer.

Its caption includes: “As you can see guys when I was in my 20s I was very slim then I was told I had PCOS and it’s been a struggle ever since however I make the most of myself and remain positive because it’s what in your heart counts the most.”

Do you think Gemma should appear in the real Vogue? Share your thoughts with us on our Facebook page @EntertainmentDailyFix.