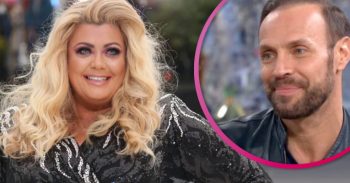 She accused Jason of "bullying" her

Gemma Collins has reportedly pulled out of the Dancing On Ice final after judge Jason Gardiner’s latest comments about her.

During an appearance on Tuesday’s This Morning, Jason took another swipe at his skating nemesis as he appeared to liken Gemma to a fridge – a comment he later insisted was a “light-hearted joke”.

Gemma then hit back on Instagram and accused the acid-tongued TV personality of “bullying” her with his “upsetting and hurtful” comments.

Read more: Gemma Collins accuses Jason Gardiner of being a bully after he likens her to a ‘fridge’

Now, The Sun has reported that Gemma has pulled out of Sunday night’s final.

A source told the publication: “Gemma is devastated, there’s only so much she can take and Jason has bullied her for months – she’s laughed it off and tried to rise above it but enough is enough – Dancing On Ice bosses should not be allowing it to carry on.

“Everyone was excited to see her return – she had cancelled everything to throw herself into rehearsals to give her fans one last show but Jason has destroyed all of that. He’s a bully.”

Ent Daily has contacted reps for Gemma and Dancing On Ice for comment.

It comes after Jason made another dig at former TOWIE star Gemma on This Morning.

Speaking about all the eliminated contestants coming back for the final, host Phillip Schofield told Jason: “Gemma’s back. The GC.”

Jason replied: “Who? Oh, I thought that was a refrigerator.” 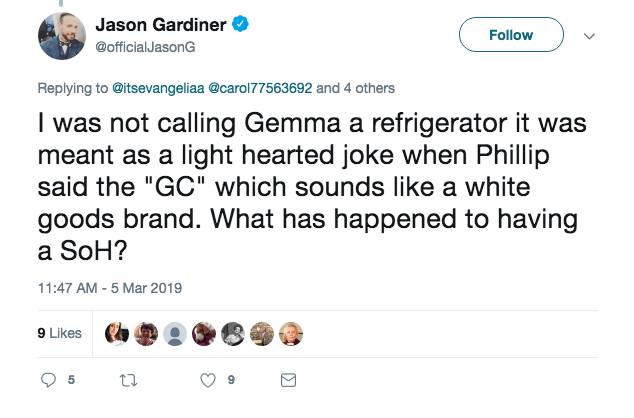 He tweeted: “I was not calling Gemma a refrigerator it was meant as a light hearted joke when Phillip said the “GC” which sounds like a white goods brand. What has happened to having a SoH?”

Meanwhile, Gemma took to Instagram to accuse Jason of “bullying” her.

She wrote: “I’m really tired of being BULLIED by this man…. I wish you would stop….. it’s very very upsetting and hurtful let it go Jason stop bullying me ENOUGH is ENOUGH.

“I won’t be bullied any more making me feel uncomfortable to come back to the final on Sunday!”

She added: “I was looking forward to Sunday but won’t be anywhere near someone who’s BULLYING me…. this is NOT ACCEPTABLE on any level comparing any human to an electrical appliance is not acceptable #STANDUPTOBULLIES.”

Her professional skating partner Matt Evers also tweeted: “There is no room for bullying in my world. None.”

Thank you Matt such a shame I was looking forward to Sunday x I tried my best week after week 😢 https://t.co/hkwbC2SeeD

Gemma replied: “Thank you Matt such a shame I was looking forward to Sunday x I tried my best week after week.”