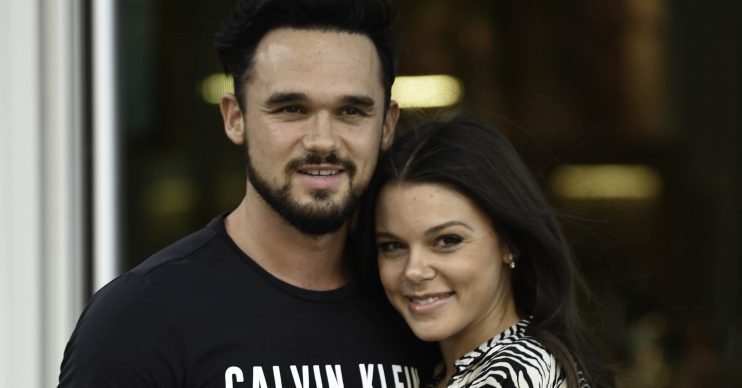 They recently ended their engagement and it seems as if Gareth Gates is struggling to come to terms with his split from Coronation Street star Faye Brookes.

As she enjoyed a night out with her pals, Gareth seemed to be dealing with the split somewhat differently.

Taking to Twitter, he posted a video of himself singing Jason Mraz’s track I Won’t Give Up.

He captioned the post with the broken heart emoji.

Looking downbeat, Gareth sang: “I won’t give up on us, even if the skies get rough. I’m giving you all my love, I’m still looking up.”

Fans were quick to rally round the star, who was reported to have asked Faye to give back the £30k engagement ring he presented her with back in January.

One even said the emotional video had made her cry.

Beautiful 💗 Made me cry 😢 hope you are okay.

Others referenced the fact that Gareth and Faye had an on/off relationship, with the pair splitting before reuniting and getting engaged.

This is abit emotional isn’t it .. but a relationship that keeps breaking ain’t worth fighting for.. hope you find where you want to be and find happiness 💕💕

Others said they hoped that his former fiancée saw the video.

Beautiful, hope she sees this ❤️

Awwww bless you hope it all works out for you 💞💖 xx

Faye, meanwhile, was seen putting on a brave face as she hit the town with her elder sister Judy.

She also posted a series of inspirational quotes to her Instagram Stories.

One showed her on a boat looking out to sea with the caption: “Here’s looking to the future.”

It’s been a period of change for Corrie star Faye. As well as splitting from Gareth she has also announced that she is to leave the cobbles.

She’ll be seen on screen playing Kate Connor till the autumn.