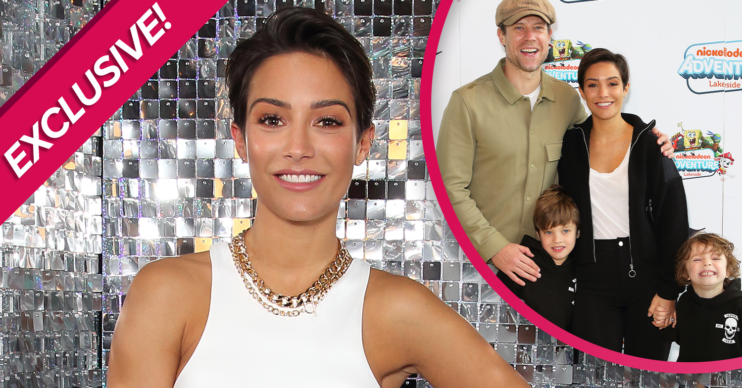 Former Saturdays singer Frankie Bridge has opened up exclusively to Entertainment Daily about her “constant struggle” with eldest son Parker.

However, in a new interview Frankie has opened up about the “stressful” side of parenting.

Speaking to ED!, she revealed the “pressure” she felt when it came to getting her kids to eat healthily.

“My first, Parker, was a bad eater, but Carter was a good eater,” she revealed. “It was maybe because I was more relaxed.”

Why is it a “constant struggle” for Frankie Bridge?

Frankie added: “It’s a lot of pressure as a parent trying to get your kids to eat healthily and it doesn’t always work out.

“I try to be laid back when it comes to treats, but at the same time I like to keep it balanced.”

The singer, who admitted she struggled with an eating disorder in the past, added: “It’s the same for me. If I fancy something I’ll have it, but I also make sure I have plenty of veg.”

Frankie said she took Parker to food sensory classes but, as he was a bit older, she thinks it was “probably too late”.

I still have trouble with my eldest so it’s a constant struggle.

She added: “It’s stressful because you want them to have all the goodness. I still have trouble with my eldest so it’s a constant struggle.”

As such, Frankie has teamed up with Ella’s Kitchen to write The Munchy Trunks, a “little adventure book” you read to kids while they’re eating.

Lockdown in the Bridge household

Frankie also opened up about lockdown with Wayne and the boys.

“At first, I think we all thought it’s quite nice to spend time together. Then it got a bit much.

“It’s been hard to explain it all to the boys, and it’s a worry because you want everyone to be safe and healthy, but it feels like it’s becoming normal now. That’s amazing and it definitely needs to, but it’s strange,” she added.

Read more: Sam Bailey jokes that Simon Cowell has had secret plastic surgery and hasn’t really broken his back

However, it sounds as if lockdown did have its moments in the Bridge household.

“I think sometimes we forget that they are going through the same as we are,” Frankie said.

“They were stuck at home, bored of us, bored of each other and they have missed seeing their friends and living their normal lives. Just because they’re five and six doesn’t mean they haven’t noticed it.”

So what’s next, post-lockdown, for Frankie?

A stint on Celebrity SAS: Who Dares Wins, perhaps, after husband Wayne won his series?

“Absolutely not!” she told us. “Especially because we’ve become friends with Ant [Middleton] now, so if he was shouting at me, I’d be like: ‘Stop it!'”