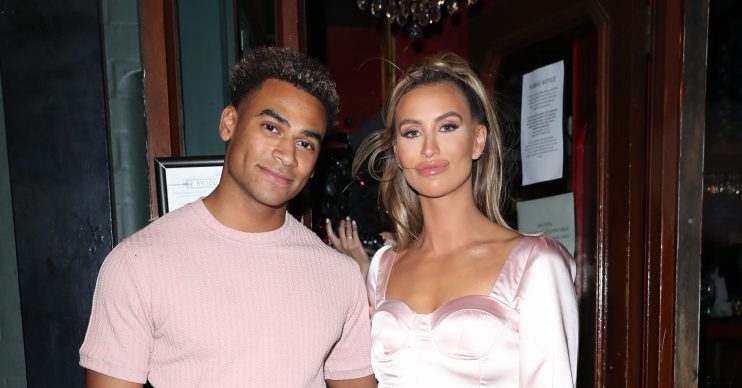 The TOWIE star, 29, and Jordan, 24, were snapped kissing and cuddling at her cocktail launch party in London last night.

The unlikely pair weren’t at all fazed by onlookers as the mum-of-one passionately wrapped her arms around the model before leaning in for a kiss.

Ferne, who stunned in a pair of white silk trousers and a pale pink crop top, and Jordan, who was also wearing a pink top, happily posed for pictures outside the venue.

Read more: Ferne McCann is looking for love as she admits being a single mum is ‘lonely’

However, the TOWIE star recently said she’s now after something more meaningful.

The fitness fanatic, who is mum to Sunday, shared: “I’m sick and tired of lust. Maybe an older man because I’ve always gone for younger guys. I’ve only ever been a single mum so I don’t know any different and I don’t need help.

“However, it would be nice to meet someone to relieve that pressure sometimes, but all that doesn’t come instantly so I need to be patient.

“A lot of my friends are in partnerships, and people on Instagram who were pregnant at the same time as me are now on to their second babies.”

Ferne said she’s definitely ready to settle down and would love to get married.

In an interview with Closer, she also said she’d like more kids in the near future.

“I would absolutely love to have more children. I would never ever rule that out. I’m not sure how many more I would like exactly – it just depends where I’m at I guess.”

Jordan became the new villain of the villa after he suddenly decided to pursue India Reynolds despite just making things official with Anna.