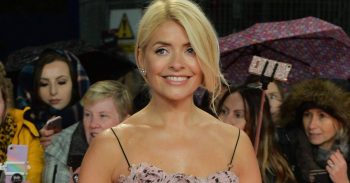 Fans rally around Holly Willoughby as her beloved grandmother dies

Holly Willoughby has revealed her beloved grandmother has passed away.

The This Morning presenter, 36, took to Instagram on Tuesday to share a photo of herself and her nan alongside an emotional tribute.

Holly wrote: “Today we say goodbye for a little while to my beautiful Nan… go and be with Grandad… he’s been waiting for you… love you… miss you…”

Fans, of course, rushed to offer their condolences to Holly and her family.

A third added: “Sorry for your loss Holly.”

Holly won’t be hosting This Morning on Tuesday alongside her co-star Phillip Schofield.

Instead, Celebrity Big Brother’s Bit On The Side presenter Rylan Clark-Neal will be filling in for her.

Fans were thrilled to have Rylan back on the This Morning sofa.

One person said: “I can’t wait to watch when I get home from work, the last one they presented together was hilarious!”

Another wrote: “I always make sure I watch when you are hosting Rylan!” while a third tweeted: “Can’t wait for This Morning to watch Rylan. You always bring a smile to my face.”

Last week, Holly stunned fans when she shared a sweet photo with her 71-year-old mother Linda.

The glamorous mum and daughter duo, who are sporting similar short blonde hairstyles, are both grinning broadly into the camera for the picture that was simply captioned “mumma”.

And thanks to her jaw-dropping youthful appearance, Holly’s followers thought her mum was actually her sister!

“I thought you were sisters,” one commented, while a second wrote: “Your mum looks amazing!”

Leave your condolences for Holly and her family on our Facebook page @EntertainmentDailyFix.