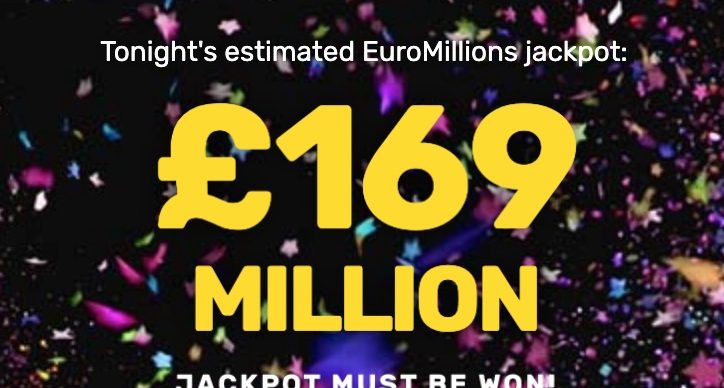 The EuroMillions jackpot is a massive £169million tonight (8.10.19), after the prize fund was rolled over from last Friday.

And, in another twist, the huge jackpot must be won tonight or the prize money will roll down to the next tier.

If the jackpot isn’t won tonight, there’s a chance that there could be several multi-million-pound prizes on offer instead of one big win.

A spokesperson for The National Lottery said: “This means, if the jackpot isn’t won on Tuesday, it will roll down into the next prize tier where there is at least one winner.

“If the jackpot is won, it could make the UK’s biggest ever winner.

“Under Jackpot Cap rules, the top prize can roll over four consecutive times once the cap has been reached, before it must be won in the fifth and final draw.

“As the fourth capped rollover has now passed, the entire Match 5 + 2 Lucky Stars prize fund must be won on Tuesday.”

The Sun reports that the current record holders for the biggest ever lottery win are Colin and Chris Weir, from Largs in North Ayrshire, Scotland, who won £161 million in 2011.

According to National Lottery operator Camelot there have been four UK jackpot winners in 2019, receiving £350 million between them.

In June, one anonymous ticket holder became the UK’s third-biggest ever winner after winning £123million.