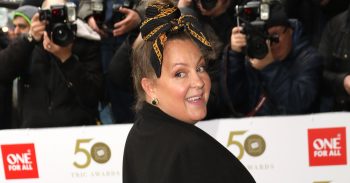 You wouldn't think it was the same person!

EastEnders star Lorraine Stanley looked a far cry from her Walford character as she arrived at the TRIC Awards.

The actress, 42, looked much classier than her alter-ego Karen Taylor when she took to the red carpet for the event yesterday.

Lorraine oozed glamour in a black waterfall jacket over a black dress with a sheer hemline and slider shoes, completing the look with a black and gold head scarf.

It’s not the first time Lorraine’s wowed us with her out-of-character appearance.

And in a conversation with The Mirror last year, the actress admitted she thinks Karen looks “awful”.

She told the paper: “I pushed for the bra straps on show and the very tight fitting stuff when I first joined.

“She’s a big woman who shows her curves. I cover mine but Karen couldn’t care less. Plus I’ve never played glamorous roles on telly so I’m used to seeing myself and thinking, ‘Oh my God you look awful.’

Lorraine added: “Although sometimes if my fella is sat next to me and he has EastEnders on I’ll say, ‘Don’t look at me on screen.’ He knows I’m a sort in real life though.”

She was joined at the TRIC Awards by actress Clair Norris, who plays Karen’s daughter Bernadette Taylor.

Clair, 21, likewise dropped the drab get-up we normally see her in for something much more stylish.

Bernadette usually wears dowdy clothes and has her hair pulled into a messy bun, but Clair impressed in a black lace dress and stilettos, brunette hair hanging loose.

Last month, Clair took to Instagram to show off a stunning transformation that had her followers telling the star she should be a model.

She left the pic without a caption and let her face do all the talking.

Fans bombarded the comments with positive messages, telling Clair she is a “stunnnnnerrrrr” and a “beautiful woman”.

More recently, the star posted a snap that showed off a new curly-locked look – so different to dowdy Bernie.

What do you make of their red carpet looks? Leave us a comment on our Facebook page @EntertainmentDailyFix and let us know what you think of this story.