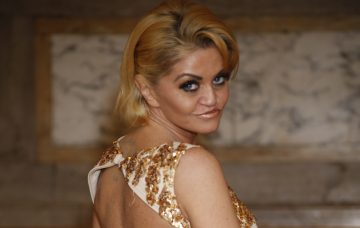 Danniella Westbrook has posted a selfie of her ripped abs to start the year with “positive vibes”.

The TV star shared a pic of herself in underwear for her Twitter followers, flexing her toned stomach and promising that 2019 will be her year.

“Looking after me in every way” and “Training isn’t always easy at 45” were written across the snap, which had the caption: “At 45 years old training is not something I love but it’s something I have to do.

At 45 years old training is not something I love but it's something I have to do.. I'm focused this year on what I want and training my mind and body is a priority… 2019 is for family health work & wealth positive vibes and feeling good .Enjoy everyone x pic.twitter.com/eXqoDH4YPB

“I’m focused this year on what I want and training my mind and body is a priority… 2019 is for family health work & wealth positive vibes and feeling good. Enjoy everyone x”.

The former EastEnders actress’ incredibly toned bod wowed many of her fans, who rushed to congratulate Danniella on her dedication to fitness and positive new year resolutions.

Hollyoaks actor David Easter replied: “It ain’t that Easy when you’re 61!!! Big Love Danni!! Your Smashing it My Friend!!!”

A second tweeted: “Well done you..look better than ever..”

Another expressed their disbelieve, commenting: “Wow 45?? you look amazing!”

The actress celebrated New Year’s Eve on a night out in Essex with ex-footballer Gary Lineker’s brother, Wayne.

She cosied up to the nightclub owner, 56, with a kiss on the cheek and a bottle of Belvedere Vodka.

Despite ending the year on a glam note, the months leading up to Christmas were somewhat rocky for the unlucky TV star.

In October, Danniella expressed fears that she might not have long left to live after a womb cancer diagnosis meant she had to have a hysterectomy.

Then in December, Danniella told Twitter followers that she lost her new job flogging teeth whitening for a Liverpool-based beauty business.

Good night God bless one and all from
The Westbrook 😘 pic.twitter.com/SdTG8y7aDI

Danniella has been equally unlucky in love. She was most recently engaged to toyboy Alan Thomason, 32, but the pair split.

She married her first husband, van driver Ben Morgan, in 1998. They divorced a year later.

In 2001, Danniella married businessman Kevin Jenkins and had a daughter with him, but they parted ways in 2014.

Do you think things are looking up for Danniella? Leave us a comment on our Facebook page @EntertainmentDailyFix and let us know what you think.