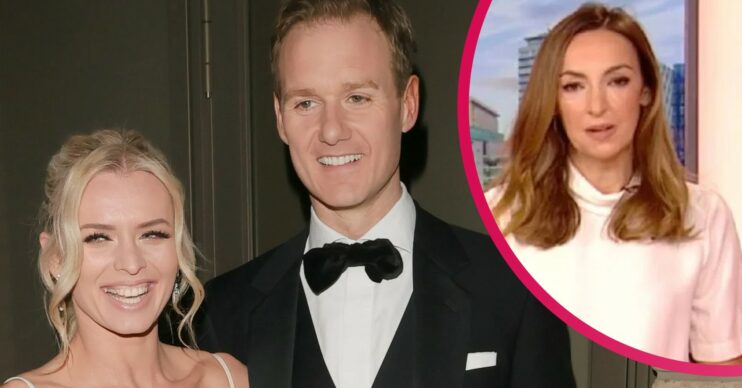 The trio are taking part in a special charity event

The pair are set to judge the Burrow Strictly Ball in Leeds next month to raise money for the MND Association with Rob Burrow MBE.

Meanwhile, Sally will be competing in the event.

Rugby league star Rob Burrow was diagnosed with motor neurone disease in 2019 and given two years to live.

Since then, he has continued to campaign and fundraise for the MND Association.

Next month, Rob’s sisters are holding a special Strictly event in Leeds.

Dan, 44, announced his and Nadiya’s, 32, involvement in the event on Twitter yesterday (February 7).

He also revealed that BBC Breakfast co-host Sally, 50, will be joining them.

In a video, Dan said: “You may be wondering why we’re all together. Well, we’re all taking part in a very special charity event.

“Over to Sally Nugent…”

Sally explained: “We will all be at the Rob Burrow Strictly Charity Ball, which is raising money for motor neurone disease.

“It’s going to be on March 19th and these two are going to dance.”

Dan and Nadiya return to the dancefloor

Dan and Nadiya went on to demonstrate the perfect Waltz position, as Sally awkwardly stood to one side.

She joked: “This is all a bit awkward…”

Sally later admitted that she felt “nervous” ahead of taking to the dancefloor, while Dan and Nadiya prepare to judge.

In addition, Dan also posted a series of photographs of Sally rehearsing with Nadiya.

Alongside the snaps, he wrote: “My TV professional partner had a little taster session with the 2 time World Champion last week (she’s quite good).”

Fans were thrilled over the announcement, with one saying: “Sounds like an amazing event for a very worth while charity.”

A second wrote: “Have a fantastic time. A brilliant event in aid of a marvellous cause. Keep dancing!!”

Another tweeted: “A chance for @sallynugent to warm up for Strictly this year I think!”