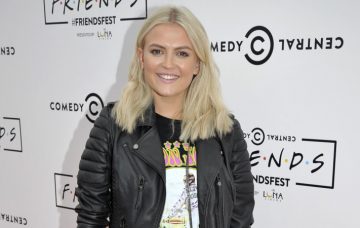 She re-created a famous sitcom scene at FriendsFest!

Coronation Street’s Lucy Fallon donned a wedding dress for a funny picture while hanging out at Comedy Central’s FriendsFest in Manchester.

Lucy, 22, uploaded the image to Instagram, showing her clad in a wedding gown and holding a bouquet of flowers, while a pal posed next to her.

She sent the snap to Tom with the caption: “What do u think of this one? @t_leech.”

Lucy’s fans also loved the snap, with one telling her: “Love it, Lucy!”

Another wrote, “Beautiful photo,” while a third added: “Literal princess!”

Lucy was earlier snapped on the red carpet alongside Corrie co-star Tina O’Brien, 35, who plays her on-screen mum, Sarah Platt.

FriendsFest is an annual festival that tours the UK and allows fans of the sitcom the chance to explore the show’s sets, props and dress up in iconic costumes.

Other stars at the Manchester event on Tuesday included former Emmerdale actress Roxanne Pallet and Hollyoaks star Jamie Lomas, who made his red carpet debut with new girlfriend, Portia Hughes.

Lucy, meanwhile, is happily smitten with intranet manager Tom, 27, and real wedding bells could be on the horizon – just not yet!

She told The Sun’s Fabulous magazine earlier this year: “”Well, I hope so anyway. Yeah. I have a Pinterest board of wedding things, only because I like weddings, though! I do want to get married but not, like, now.”

She added: “We’re best friends, and I think that’s what makes it work so well.”

The couple did a joint interview for OK! Magazine last year, where Lucy joked she’d be leaving hints for Tom about possible rings!

Tom said: “Marriage is definitely where we’re heading so I store images away for when I need them.”

What do you think about Lucy’s wedding dress photo? Leave us a comment on our Facebook page @EntertainmentDailyFix and let us know what you think!