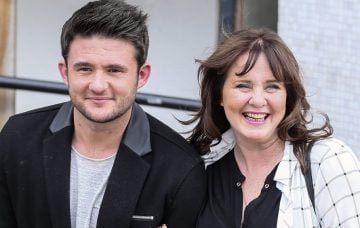 She broke down on This Morning during an interview on Tuesday

Coleen Nolan’s son Shane has said it was “heartbreaking” to watch his mum crying on This Morning.

Loose Women panellist Coleen, 53, broke down in tears during an interview on Tuesday as she discussed the trolling she’s been subjected to following her TV clash with Kim Woodburn last week.

As a result, a “very upset” Coleen has pulled out of Thursday’s Loose Women and cancelled interviews to spend time with her family instead.

Taking to Twitter, son Shane said: “Just watched my mum’s interview on This Morning. Absolutely heartbreaking. Twice I’ve seen her like this this week.”

Shane went on to big up Coleen’s recently-announced solo tour, vowing: “The strongest, kindest women I know. This tour will prove that, and show how much you’re loved. 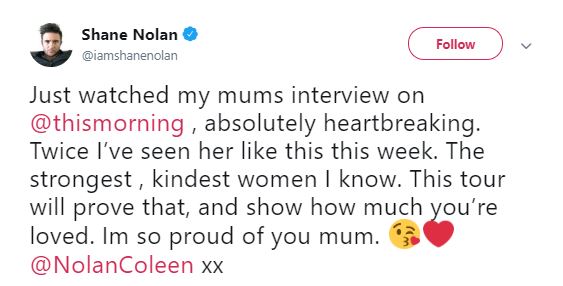 Many of Coleen’s fans responded to Shane’s message, telling him to send Coleen their love.

During the interview with Holly Willoughby and Phillip Schofield, Coleen broke down as she addressed her TV clash with Kim, 76, on Loose Women last week.

The two women were reunited by producers to try to bury the hatchet following a falling out on Celebrity Big Brother last year but it didn’t work, with Kim storming off set in tears after they both failed to resolve their differences.

Coleen has now cancelled her scheduled appearance on Loose Women on Thursday and pulled out of planned radio interviews.

Her rep said: “Just to let everyone know – Coleen won’t be on @loosewomen on Thursday she’s decided to go home & spend time with her family instead.