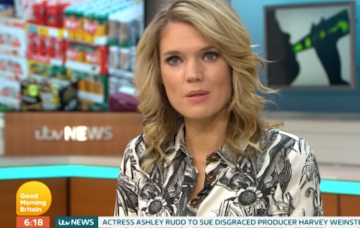 He was in no rush to take responsibility

Charlotte Hawkins was left frustrated during Tuesday’s Good Morning Britain after Piers Morgan’s cup of tea got in the way of her shot.

While Charlotte was trying to present her news bulletin, Piers decided to pick up his mug and take a sip of his cuppa while in frame.

Being the professional she is, Charlotte continued to deliver the news but gave Piers a stern talking to afterwards.

“You may be making an effort to be quieter and not interrupt as much,” she told Piers. “But you’re still making your presence felt, because your cup of tea, literally as I was speaking, straight through the shot.”

But Piers, 53, was in no rush to apologise and instead poked fun at his co-presenter.

“It’s probably the most interesting thing about your news bulletin, my hand moving across,” he quipped.

Charlotte hit back: “Were you actually listening to it – and not reading the paper while I was reading the news?”

“It was the director’s fault because he can point these cameras from any angle, he’s deliberately choosing to do it to embarrass you,” Piers chimed in.

“I raised my tea in exactly the same way I’ve always raised it, he knows it, you know it, I know it.”

Charlotte, 42, and Susanna Reid, 47, then lifted up their mugs in front of Piers’ face to prove just how annoying it was.

One person tweeted: “Charlotte I noticed the cup of tea, too,” while another said: “I like Piers however I was always taught interrupting people is rude. STOP IT!”

Another defended Piers saying: “Oh Charlotte leave Piers alone and allow him to have his cup of tea in peace.”

This comes just a few weeks after Piers sparked an intense debate by revealing his tea-making technique.

When it comes to making a good cuppa, the technique is a major debate among serious tea drinkers.

Good Morning Britain viewers were left shocked when Piers revealed that he always pours the milk in first before adding the teabag and hot water.

The presenter said that his method would result in a “classic British” cup of tea.

What’s YOUR method for making a good cuppa? Leave us a comment on our Facebook page @EntertainmentDailyFix and let us know!