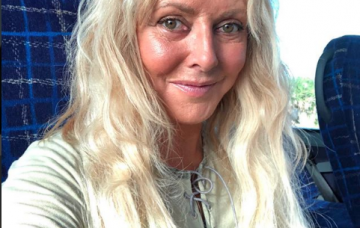 Carol Vorderman celebrates as brother given all-clear from cancer

Carol has always been close to her sibling Anton

Presenter Carol Vorderman has revealed her joy at brother Anton being given the all-clear from bowel cancer.

She told listeners of her BBC Radio Wales show that her beloved brother had been diagnosed just weeks ago.

But the 57-year-old was delighted to announce her elder sibling has now been given a clean bill of health by doctors after treatment.

Her mother sadly lost her battle with cancer only last year.

Having brought up how hilarious Anton is during a discussion about fancy dress, Carol spoke about her brother’s health.

“He’s wonderful,” she said with fondness.

“And in fact – I don’t mind saying it now – about a month ago he was diagnosed with bowel cancer.

“But he’s had the all-clear and everything. It’s done and gone and he’s had all the checks, all of the scans and all of that.”

Clearly overjoyed and emotional, former Countdown star Carol continued: “He was in fact 65 a few weeks ago – so that’s marvellous.

“That was the best birthday present of all and I love him to bits.”

Carol, who also has an elder sister called Trixie, has spoken previously about how she idolises Anton.

The pair grew up together in Prestatyn after their father left the family when Carol was just three weeks old, with Anton becoming a father figure to her over the years.

She told Wales Online: “Anton had been born with a cleft palate and a double hare lip and, by the time he’d become a teenager, countless operations had left him with a noticeable deformity.

“And, when I was six and he was 14, I remember strolling together down the local high street and seeing people gawking and doing double- takes as we went by. My cheeks would burn with indignation.”

Laughing, she remembered how Anton once answered the door to guests of his at a Rocky Horror Show fancy dress party in fishnet stockings.