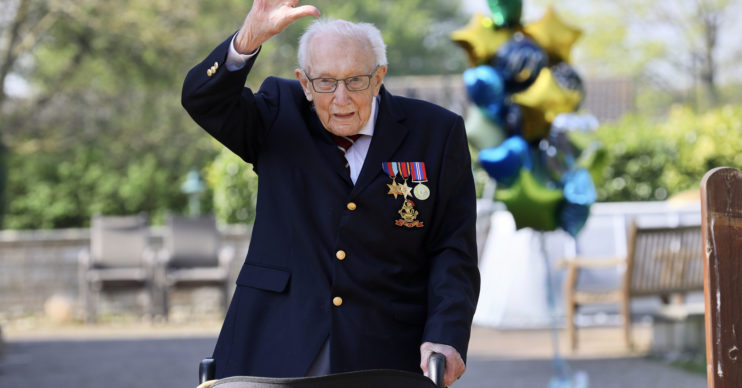 Captain Tom Moore ‘added to honours shortlist’ after reaching No.1

Captain Tom has raised more than £28m for NHS charities

Captain Tom Moore could soon be adding another title to his name as thousands have nominated him for the honours list.

The “national treasure” has been shortlisted for an honour.

He has raised more than £28 million for NHS charities by walking lengths of his garden ahead of his 100th birthday next Thursday.

He then released a charity single which became a number one hit.

Tom’s outstanding contribution to the public’s charitable efforts have seen him become a national treasure.

Tom has collaborated with Michael Ball and the NHS voices of care choir on a cover of You’ll Never Walk Alone.

The money will go to NHS Charities Together to support workers on the frontline of the coronavirus crisis.

Captain Tom achieved his challenge on April 12, managing 100 laps of his 25m garden in 10-lap intervals.

He will find out in June, when the ceremony for the next round of honours is held.

And an insider told The Sun: “Tom’s outstanding contribution to the public’s charitable efforts has seen him become a national treasure.

“Thousands of nominations have poured in for him.

“He’s been put forward for the shortlist to get an official honour for recognition of his charity work and the positive impact he’s had on the whole of the country during the pandemic.”

Tom got a Guinness World Record for being the oldest person to have ever had a UK No1 single.

He got a second one for his fundraising efforts, for single-handedly raising the most money by walking.

Most of the nominations want to see Captain Tom named as a CBE, and the list now goes to the prime minister’s office for approval.

We can’t think of a more deserving individual to receive the gong.

What do you think of this story? Is Captain Tom a deserving hero? Go to our Facebook page @EntertainmentDailyfix and leave a comment to let us know.