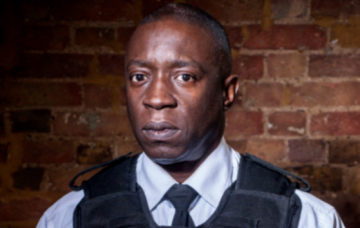 An unlikely TV star who was diagnosed with leukaemia last year has won his battle against the blood cancer.

Delroy Anglin found fame as a bailiff on Channel 5’s Can’t Pay? We’ll Take It Away, a long- running series described by the channel as ‘revealing the dramatic stories of British people on the sharp end of bad debt’.

The 57-year-old father of six had discovered his life-threatening condition after going to the doctor because he felt he was catching more colds than usual.

A routine blood test revealed the scale of Delroy’s problem and he underwent chemotherapy before being told told he had to find a stem cell transplant.

Speaking to his local newspaper, The Croydon Advertiser, at the time of his diagnosis in April 2017, Delroy feared that it was a battle which he might not win.

“You feel as if someone has pronounced a death sentence,” he said.

“Life changed in an instant. When they tell you, you’re just hoping that someone has made a mistake, but they haven’t. At the end of the day, unless somebody says differently, I’m terminal.”

Delroy received treatment at the Royal Marsden hospital in Sutton and even he was surprised at how popular he had become thanks to his television appearances.

“It’s strange, people don’t usually like bailiffs,” he said. “But I have had so much support, from everyone including complete strangers.”

Delroy’s search for a donor to help him was made even more difficult because of a comparatively low number of Afro-Caribbean people on the register.

That meant that in the end the cells had to be taken from his own body, but it appears the procedure has been a success.

Did you watch Delroy on Can’t Pay? We’ll Take It Away? Let us know by commenting on our Facebook page @EntertainmentDailyFix!